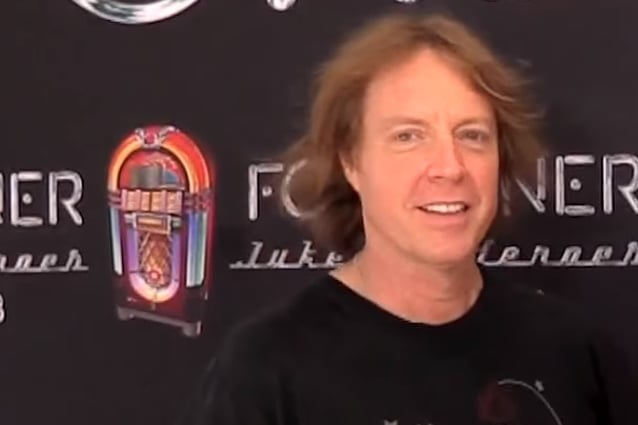 The group, which is provisionally dubbed THE END (and was known in its formative stage as SUPER STROKE), recorded the disc with bassist Jeff Pilson at the production helm and Alessandro Del Vecchio, the in-house producer for Frontiers Music Srl, mixing.

Pilson, who has been a member of FOREIGNER since 2004, told That Just Happened about THE END's upcoming effort (see video below): "The record is actually done. It hasn't been mixed yet. That's gonna start soon. We actually have a wonderful guy by the name of Alessandro Del Vecchio that's gonna be mixing it, and he's really great. And he's over in Italy. But the record is done. I'm really excited about the music, and so is the label.

"We're gonna do our best to try and figure out a way to do some shows somehow somewhere, hopefully close to the release date," he continued. "That's a goal. It's never easy, because FOREIGNER tours so much. But that is a big goal. And we're very, very excited about it. The record just came out amazing. I mean, the singing and playing on it… wow!"

Lynch told Idaho's 94.9 & 104.5 The Rock radio station about THE END: "I do a lot of records where they're just sort of seat-of-the-pants, which is nothing wrong with that, like KXM and ULTRAPHONIX, [which are] written real quick — we just get in a room and bang it out and just go with our first instincts, and we don't really labor over it. THE END record is really the opposite of that.

"Jeff and I spent a lot of time crafting the songs, as we did in the DOKKEN days," he continued. "I think there's quite a bit of '70s art rock going on in some of these songs, which is pretty cool. It's got the usual groove, heavy rock thing, melodic rock thing, it's got all that — but it's also got that '70s, ELO, ELTON JOHN [vibe] — just really interesting, intelligent, classic changes. It's a very satisfying record to listen to — it's pretty deep, and I think people will really dig it. It doesn't sound like DOKKEN; it doesn't sound like LP [LYNCH/PILSON]; it doesn't sound like LYNCH MOB. It has elements of all that, obviously. I think it's a natural evolution of the LP record that closely it resembles in my mind. It's me and Jeff sitting at his studio working it out, so what you're going to get is really that, with Robert Mason on top of it.

"God, that guy — what a monster," George added, referring to Mason. "Robert's been doing LYNCH MOB shows this year with us — not all of them, but I'd forgotten how powerful he is. Unbelievable singer."

Earlier this year, Mason told the "Talking Metal" podcast that working with Lynch, Pilson and Brown has "given all of us a renewed sense of what it was like to be creating together and maybe even playing together. Jeff and I get along great," he said. "Jeff produced 'Louder Harder Faster', the new WARRANT record. He and I have always been kind of friendly but didn't really know each other until that project, and we got on so well in the studio and elsewhere that it was a real easy tie-in for those three guys to call me up and say, 'Hey, man, we wanna do this record. We don't know what we're gonna call it, but it'll have the DNA of our bands, and it'll be us, but we want it to sound a little different. What do you think?' I was all over it."

Asked if the new project is musically similar to DOKKEN, Robert said: "I don't think it sounds like DOKKEN with me stapled on to it. I honestly didn't want… And it's no disrespect to anything, because I love what they did, and I was a fan — I still am. That wasn't something that I wanted to do. And thankfully, when Jeff and George started playing me demos and their early ideas, it doesn't sound like that. And Mick Brown [told me the other day], 'I'm so stoked about this. The cool thing is it sounds like us, but it doesn't sound like us.' It's Mick's way of saying that, I think, the DNA is there and you hear the influences and you hear who it is and what it is, maybe. We're just making music and having fun, but we are having fun being creative with each other again. And I pray that that translates into the final product and that people will just embrace that."