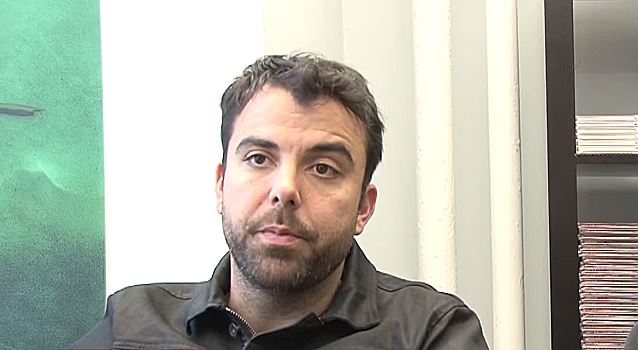 Artisan News recently conducted an interview with Eicca Toppinen of Finnish cello rockers APOCALYPTICA and the band's new lead singer, Franky Perez. You can now watch the chat below. A couple of excerpts follow (transcribed by BLABBERMOUTH.NET).

On how he landed the APOCALYPTICA gig:

Franky: "I was in a band called SCARS ON BROADWAY with the guys from SYSTEM OF A DOWN, and we were playing a festival in Europe [in 2008], Area4 Festival, and I remember sitting on the side of the stage watching these guys, 'cause there was a lot of talk about this band doing metal with cellos. So it's kind of crazy that I literally sat on the side of the stage; we opened up for them and watched them play. And then now, however many years ahead, I got a call from someone that was, basically, in touch with their management, and he said, 'Hey, APOCALYPTICA is looking for a singer.' He actually said — he used these words — 'It's kind of a long shot, but give it a shot,' And so, they sent me a track, which, another weird coincidence is that they sent me Corey's [Taylor] track, 'I'm Not Jesus', and Corey's a friend of mine. So I sang that, sent it back, and then they responded with another — 'We like that. Try this' — whiich was an original song, which was the song 'Hole In My Soul' — it's on the new 'Shadowmaker' record. Then I really wanted the gig. When I heard that song, I was, like, 'Damn! I need this gig.'"

On what caused APOCALYPTICA to be interested in hiring Franky to be their new lead singer:

Eicca: "We felt that there was serious magic in the way Franky sings and Franky's voice. It has a very unique character; [it's] very recognizable. For us, it was kind of a scary challenge to make the step to get a singer in the band, because people are used to that we are working with amazing singers. And we thought it might be impossible, even, to find an equally great singer who would be available, who's not stuck in his own band, or something else. For us, we felt it was a long shot to say, 'Franky, okay, you will be the guy,' because we were not 100 percent sure [that] Franky [would be] available to take the place. Because we are a big band, but we're not touring a stadium band that we can offer you, 'Hey, you get ten grand for a show.' [Laughs]"

The official video for the "Shadowmaker" title track can be seen below. The CD will be released in April via Eleven Seven Music Group in the United States, Canada, United Kingdom, Japan, Australia, New Zealand, the Middle East and South East Asia.