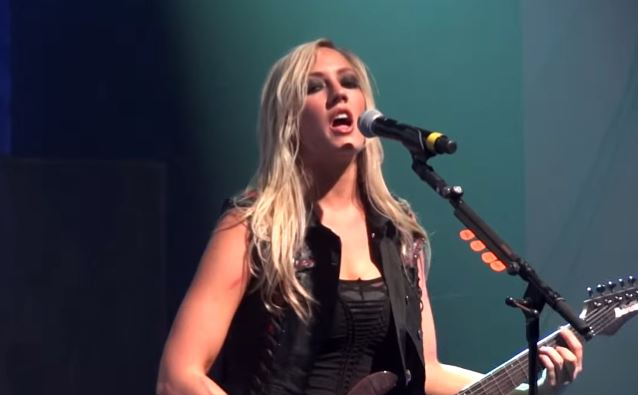 THE IRON MAIDENS guitarist Nita Strauss, who recently joined Alice Cooper's touring band, was interviewed on the August 10 edition of "The Louvau Show" on the 93.9 KWSS radio station in Scottsdale, Arizona. You can now listen to the chat using the SoundCloud widget below. (Note: The Strauss interview begins around the 19-minute mark.)

Legendary rocker Alice Cooper kicked off his summer run with three shows in Michigan in June before joining MÖTLEY CRÜE's final tour as a very special guest on July 2, running through late November. The trek marks the debut of Strauss, who was recently ranked #1 on Guitar World's list of "10 Female Guitar Players You Should Know." She takes the place of Orianthi, who has toured with Alice for the past few years.

Strauss, a longtime Ibanez signature series endorsee who made her name with THE IRON MAIDENS, FEMME FATALE and LA Kiss, joins the rest of Cooper's band — guitarists Ryan Roxie and Tommy Henriksen, plus bassist Chuck Garric and drummer Glen Sobel.