Long-running Oakland, California-based industrial/alternative/metal pioneers NEUROSIS have announced more bands for the European version of their "Beyond The Pale" event, to be held on Saturday, April 25, 2009 at the 013 venue in Tilburg, Holland as part of the Roadburn festival. They are:

OM
SIX ORGANS OF ADMITTANCE
SKULLFLOWER
A STORM OF LIGHT

"OM is such a rare bird in the vast landscape that is sound, music, art, and emotive expression that they absolutely defy description," says NEUROSIS' Scott Kelly. "The straightest line is the quickest path to the godhead, OM know this, it is the foundation of their mountain. The meditative nature of the patterns and rhythms found within the speaker flexing sonic blanket that they weave is unparalleled. OM is the heaviest band to ever walk the face of the earth."

Scott continues, "Josh Graham is a prolific individual, a man driven to create. In the years that we have spent together collaborating in NEUROSIS he has shown himself to be a visionary artist as well as a diligent worker. A STORM OF LIGHT is born of this obsession; it is an ominous sound, a cloud of oppressive doomage. Equal parts heavy and hypnotic, A STORM OF LIGHT is a band grown from truth."

Steve Von Till comments: "All must bow before the pagan wall of drone — I couldn't agree more with the opening quote of SKULLFLOWER's semi-official web site. Hearing the tortured distorted and eerily shamanic drones emanate from the stereo for the first time in the early Nineties was truly a revelation. 'IIIrd Gatekeeper' and 'Obsidian Shaking Codex' are two of my all time favorite albums and have been extremely influential on the way my brothers and I approach guitar-based heavy music: to grab an electric guitar, drive a loud amplifier to its physical limit, and ride the drone into oblivion is ecstasy, and Matthew Bower has been showing us all how it is done for 20-odd years. Finally after all these years we will all get to witness the power together at Beyond The Pale 2009."

Steve continues, "The words 'psych folk,' although being a genre of music I feel a passion and affinity for, have begun to lose their meaning and significance over the last several years. A so-called 'revival' has dredged up wave upon wave of shallow rehash. Ben Chasny and his SIX ORGANS OF ADMITTANCE, often tagged by that limiting genre, is a bright flower of inspiration to bring us all hope and remind us that as movements devolve, free spirits can rise above and remain vital among the pale imitators. Fearless and able to avoid the pitfalls and traps of classification he has constantly managed to play cathartic soul music. Not 'soul' music, but music that accompanies transformation and the journey of one's spirit. We are pleased to have this tonal psychonaut join us for this special event."

Also scheduled to appear at Beyond The Pale are THE YOUNG GODS, AKIMBO, GUAPO and U.S. CHRISTMAS, with more bands to be announced. 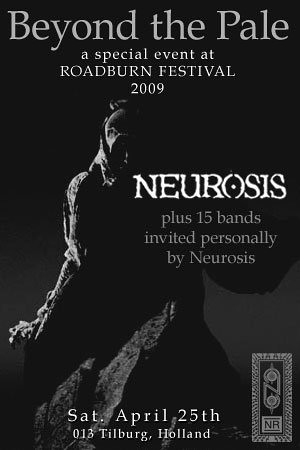