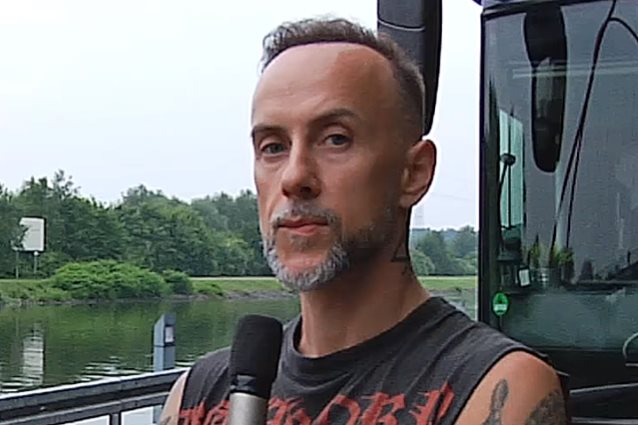 BEHEMOTH frontman Adam "Nergal" Darski was interviewed by Rock Hard magazine at this year's edition of the Rock Hard Festival on June 3 at Amphitheater in Gelsenkirchen, Germany. You can now watch the chat below.

Speaking about how he recharges his batteries between tours in order to stay inspired, Nergal said: "I [take] obligatory time off from… from life. It's a real life, actually, when I kind of connect with myself only. So at least twice a year, I just go for holidays, most cases just on my own, where I turn this [shows his phone] off and there's no contact with me whatsoever. And I do that. And I did that in Mexico lately for one week — no social media, no e-mails, no phone. So even if people are dying, I don't know about it, 'cause I don't even watch TV. All I do is I go out somewhere where no one knows me, bring a bunch of books that I hardly have time to read when I'm doing all this. So I just read books and sleep and just be with myself, and I love those moments, and I really cherish them. So I do that, yes. But then again, I have a pretty intense personality and I love my life. And it's not that I do stuff that I don't like; I honestly embrace and love my life. But it's good to find these precious moments that you can balance it out. So I live a very intense life, but I hope that I know how to balance it out."

Nergal added that he finds those solitary moments very inspirational. "I need that," he explained. "Life needs its dynamics, so you don't burn out. And even though it's been very hectic lately for me, I don't really feel burned out; I'm on fire, actually. We're writing new stuff with BEHEMOTH. We've got fucking… I don't know… I don't wanna say too much. All I've gotta say is we're super creative. And it's super early stage of pre-production or even thinking about the next record, but we are pretty much safe now with all that stuff. We're just making plans out for the next year, and I can tell you there's gonna be some big news coming out. So, yes, I can't wait."

The band's six-week North American tour with SLAYER, LAMB OF GOD kicked off on July 12 in Bemidji, Minnesota, and will conclude on August 20 in Phoenix, Arizona.