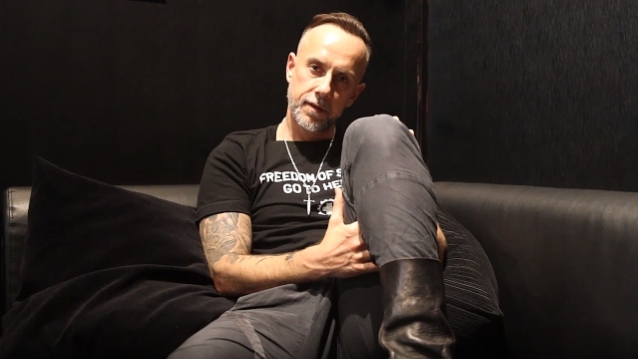 Finland's Tuonela magazine recently conducted an interview with frontman Adam "Nergal" Darski of Polish black/death overlords BEHEMOTH about their new album, "I Loved You At Your Darkest". You can watch the entire chat below. A few excerpts follow (transcribed by BLABBERMOUTH.NET).

On why BEHEMOTH chose the "I Loved You At Your Darkest" album title:

Nergal: "First of all, after such a strong and powerful title like 'The Satanist', I think it would be a huge mistake for us to try to invent or come up or top the magnificence of the word 'The Satanist'. It's like the ultimate title. That's it. There's nothing beyond that. So, what I needed to do, is I needed to go back, like really find myself and my thinking and bring something that's going to be groundbreaking within our subgenre and something that will make people confused, that will make people think, that will make people ask and question. That's what this new title does. The fact where it comes from and the meaning behind it and the new meaning it can give to it which I specifically mean because we are not a Christian band. We're quite [the] opposite, so using that tool and just twisting it around and throwing it back at them, I just couldn't come up with something more sacrilegious and blasphemous than just doing that. Also, I think that a lot of people from both camps can be very confused and very disturbed, even metalheads or kids that don't do their homework and they don't do their research and they'll be like 'What the fuck? What are these guys thinking? He's going to put Jesus [on a pedestal].' If my vision demands that, I'll do whatever the fuck I need to to complete my vision. Yes, I think it's cool. I wasn't really one-hundred percent convinced in the first place. I came across that sentence and I was like, 'Oh shit, that's amazing. That sounds fresh and sounds new.' What I did, I told this to Orion, our bassist, [and] he said, 'Oh, cool.' Then he immediately put it on the wallpaper on his laptop and he kept it for months and every now and then I'd see his laptop and say, 'What do you think?' 'I think it's an amazing title.' For a long time, it was still in my head, but I wouldn't have been one hundred percent if it was going to end up being a title. There were some other options coming back and forth, but then none of them were nearly as brilliant as this one. So, I decided, 'Okay, it's kind of risky, but who is not risking is not drinking champagne.'"

On the writing process for "I Loved You At Your Darkest":

Nergal: "It was pretty regular. It usually starts with me just jamming on the guitar and bringing ideas to the rehearsal room. There was nothing extraordinary about the songwriting process. I think it took me a couple of months to collect all the ideas. It took us a couple of months to work on the arrangements. It took us six months to track everything down, which is probably the longest we've taken ever, but then the whole recording was so spread out in time and also in places because pretty much every instrument we recorded in a different location in a different city. The album, like sub-mixes were done in Sweden and was mixed in the U.S. It took us six months to complete all of it, or longer, so it feels like an eternity, but it was pretty smooth, I must say. I mean, with 'The Satanist', we faced some serious problems. We had to postpone the release date and it was a mess. Here, no. It was relatively smooth. We clashed sometimes within the band — the three of us, when we discuss, we clash, we collide because we have different visions and stuff, but we are pretty much on the same page most of the time. There are some tensions here and there. It's good they are there, but the result, I was, like, 'Oh, wow. We must be doing something right.' I'm super-proud of it. I'm really proud of it. I mean, of course, it's too early for me to judge that, but it's one of those records that's done, it's done and I don't want to go back and do any extra tweaks, but would I like to do something better? I don't think we could do anything better. No fucking way."

On whether he considers BEHEMOTH to be an "artistic" band:

Nergal: "I guess so. I like to think of BEHEMOTH as something more than just a rock and roll band. We are not your typical heavy metal band. We use heavy metal, but it's just one platform. There's more dimensions there and we have so many interests and we're so distracted that energy just flows everywhere and explores different channels of the universe. We try to bring what's interesting and inspiring in one place and make an art of it. So, to me, it's like yeah, I really see us quoting one of our own album titles, '[Zos Kia Cultus] Here And Beyond', I like to think of BEHEMOTH as a music event, a musical band, a music band and beyond. I'm really interested in just exploring different dimensions with this band."

"I Loved You At Your Darkest" was released on October 5 via Metal Blade in North America and Nuclear Blast in Europe.