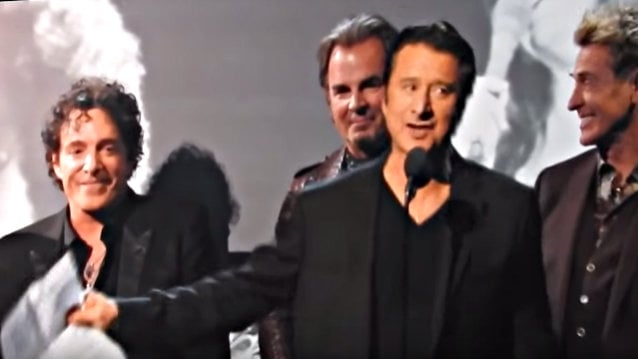 Steve Perry reunited with JOURNEY for the first time in years as they were inducted into the Rock And Roll Hall Of Fame last Friday (April 7). The iconic singer appeared onstage with his former bandmates as they each gave speeches, but did not perform with the group later in the event.

Speaking to Rolling Stone, JOURNEY guitarist Neal Schon said about reconnecting with his former bandmate for the first time in more than a decade: "I really loved seeing Steve Perry, who I haven't seen in a long time, since we did the Hollywood Walk Of Fame [in 2005]. I went in his room backstage. I think it was one of the reasons I was so highly emotional. I hadn't seen him in a long time and I realized how tight we always were. Looking at the old pictures and listening to the music we made together, I got emotional. Probably had I not been in his room before so I wouldn't have been as emotional, but who knows? Steve and I were very, very tight for so many years."

He continued: "At the end of JOURNEY, around 'Trial By Fire' [in 1996] or even 'Raised On Radio' [in 1986] we were having a falling out as far as the direction of the band. It was more or less like that. There were a lot of other issues going on that were kind of stupid looking back. I'd hoped we'd put everything aside and get back to our great friendship that we always had, the admiration and respect we had for one another. I felt like that was definitely there. Some of his friends were in the room with my wife and I, and they snapped some photos. People can genuinely see that he was very happy and so was I. Every picture tells a story."

Asked what he and Steve talked about when they met backstage, Neal said: "I looked at him and said, 'Hey, man, I really miss you.' There was very good eye contact. It was real. It wasn't just things being said because of the ceremony and to keep things cool. He said, 'Coffee is way overdue for us.' I went, 'Let's do it. Please.'"

Regarding whether he was hoping Steve would change his mind about singing with JOURNEY at the Rock Hall induction, Neal said: "I wasn't even thinking like that. To me, the main thing with Steve is that we were always great friends and music was kind of always there, but right now we haven't seen each other in so long. I'm just looking forward to getting reacquainted with the guy and be his friend. That's where I'm at."

In addition to Perry and guitarist Neal Schon, Jonathan Cain, Ross Valory, Gregg Rolie and Aynsley Dunbar were inducted, as well as current drummer Steve Smith, who's on his third run with the group.

The 32nd annual Rock And Roll Hall Of Fame induction ceremony was held at the Barclays Center in Brooklyn for the third time. An edited version will later air on HBO and there will be a radio broadcast on SiriusXM.