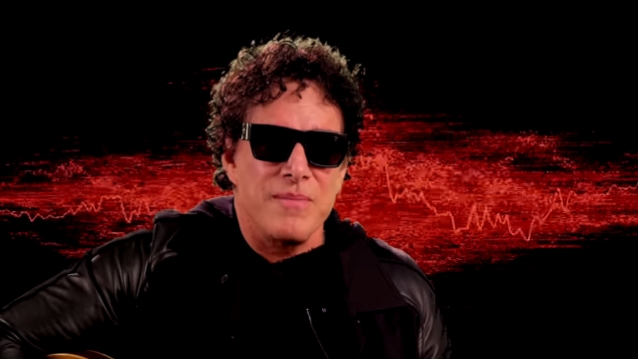 Neal Schon has extended an "open invitation" to Steve Perry to join him at his upcoming "Journey Through Time" shows at the end of next month.

"Neal Schon's Journey Through Time" will play a warm-up show on February 22 at the Jackson Rancheria Casino in Jackson, California before officially kicking off its tour on February 23 at the Fox Theater in Oakland, California.

On Monday, Schon took to his Twitter account to let the former JOURNEY singer know that he is welcome to come up on stage at either of the upcoming concerts.

"Here's an Open invitation to Steve Perry to come out on ether the 22nd or 23rd would love to see you Steve," the guitarist wrote.

Last October, Perry told Rolling Stone that he couldn't imagine working with Schon in any capacity again or even re-establishing their friendship.

The singer, who originally left JOURNEY more than three decades ago, made his comments in response to Neal's frequent public calls for a renewed collaboration.

"I'm not sure that's possible without stirring up hopes of a reunion," Perry said. "Please listen to me. I left the band 31 fucking years ago, my friend. You can still love someone, but not want to work with them. And if they only love you because they want to work with you, that doesn't feel good to me."

Last summer, Schon told the Detroit Free Press that he would love to collaborate with Perry on an R&B-style project. "I think Steve has an amazing, soulful voice, and I know he loves R&B," the guitarist said. "I don't think he'd ever want to do a JOURNEY record again. It's just too hard. [The notes are] way, way up there, and last time I heard him sing, his voice was a lot lower. But it was still very soulful. You can sing R&B and soul music and not need five octaves in your voice. [With JOURNEY], he set the bar so high for himself and for anyone else."

Neal Schon, Steve Perry and Journey Through Time https://t.co/fYnu5wBrOF via @YouTube here’s an Open invitation to Steve Perry to come out on ether the 22nd or 23rd would love to see you Steve ? pic.twitter.com/RNDmXZmELU