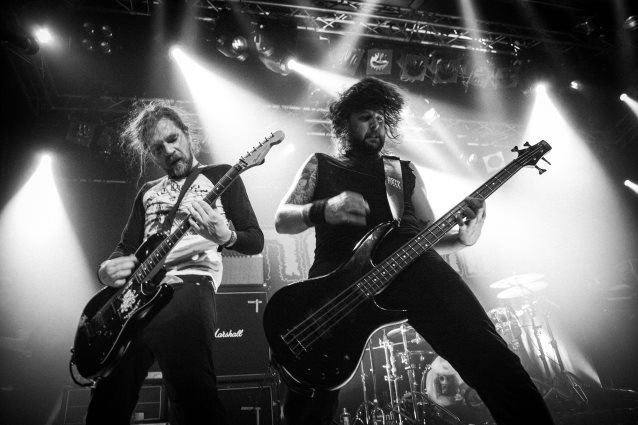 "Blasting Shit to Bits - The Final Show", a documentary film focusing on the final 2012 performance by Sweden's legendary grindcore outfit NASUM, will premiere at Copenhagen's Music Film Festival on April 27 to coincide with the band's 25th anniversary.

During its tenure, NASUM quickly rose to become one of the most influential acts of the extreme underground. When lead singer Mieszko Talarczyk disappeared and died in the devastating and tragic tsunami of 2004, NASUM instantly ceased to exist. An eight-year break followed before NASUM's surviving members (Anders Jakobson: drums, Jesper Liverod: bass/vocals, Urban Skytt: guitar, Jon Lindqvist: guitar/vocals) enlisted the help of ROTTEN SOUND vocalist Keijo Niinimaa and reunited to celebrate what would have been their 20th anniversary by embarking on a full world tour with the intent of ending NASUM "the way it was supposed to — exploding in a ferocious, blasting frenzy, not wither away at the mercy of tragedy."

Four and a half years after NASUM's last live performance, the band and filmmaker Michael Panduro will release a music film documenting the band's final, emotionally and sonically pulverizing show in front of a thousand fans at Stockholm's now-defunct Debaser Medis venue.

"Blasting Shit to Bits - The Final Show" features the full concert, along with interviews and retrospective footage.

Check out a short teaser below.