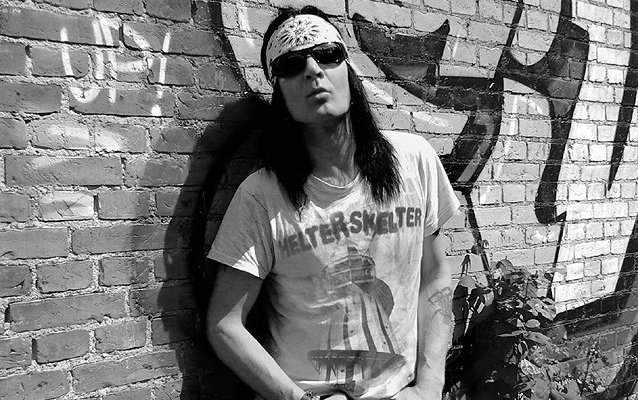 Vocalist Andy Pierce (real name: Anders Persson) of Swedish hard rockers NASTY IDOLS died on Thursday, December 5 after suffering a brain hemorrhage at the home of his girlfriend in Denmark. He was 45 years old.

"We, the band members, have been talking a lot and it is a shock," NASTY IDOLS guitarist Peter Espinoza tells the Swedish newspaper Sydsvenskan. "It goes up and down. One second you're not thinking about it, and then the next second, it hits you like a bomb. It's terribly sad."

He adds: "[Andy] was a very funny human being. We were always having minor quibbles at gig time. My hair is falling off, it happens to most people sooner or later, and he always said, 'It's cool that you're going bald, but wouldn't it be cooler with a baseball cap?' We were always giving each other friendly jabs like that. He was a truly wonderful and funny person."

Formed in Malmö in 1987 by Pierce and bassist Dick Qwarfort, NASTY IDOLS released their first single, "Don't Walk From Love", the following year. The band's debut album, "Gigolos On Parole", came out in 1989, earning them the status of one of the hottest new rock acts in Scandinavia. Their second album, "Cruel Intention", was recorded in 1990 between gigs and tours just as the L.A sleaze/glam rock scene was at its peak. Following the release of "Cruel Intention" in 1991, NASTY IDOLS became icons in the genre and their music videos for "Cool Way Of Living", "Can't Get Ya' Off My Mind" and "Trashed N' Dirty" were in rotation on MTV's "Headbangers Ball".

While other bands in the genre were breaking up in the wake of grunge's rise and "hair" metal's loss of popularity, NASTY IDOLS carried on with their rock 'n' roll crusade and released "Vicious" in 1993. The album spawned two music videos, "Heads Down In Tinseltown" and "Ain't Got Nothing".

NASTY IDOLS disbanded in 1995 following the recording of their fourth album, "Heroes For Sale". They eventually reunited in 2006 for the "Rejects On The Road Tour" and issued a comeback album, "Boys Town", in 2009. Their final studio album, "Kalifornia", came out in 2012.