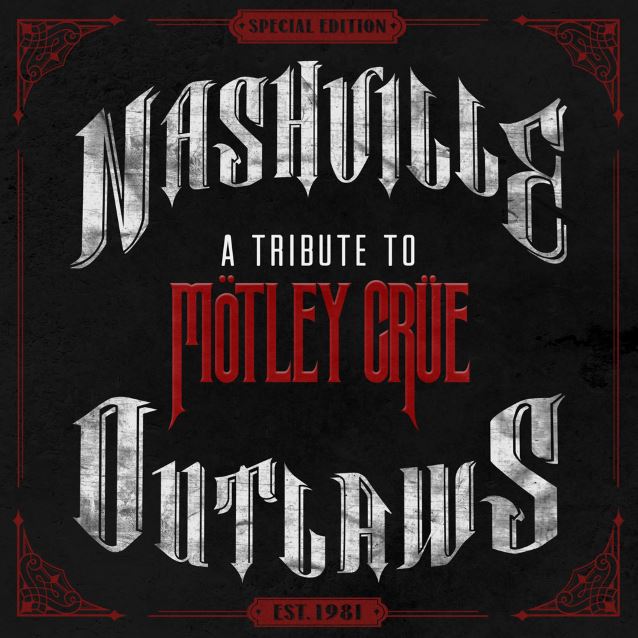 "Nashville Outlaws: A Tribute To Mötley Crüe" sold around 31,000 copies in the United States in its first week of release to land at position No 5 on The Billboard 200 chart. The CD arrived in stores on August 19 via Big Machine Records.

"We did not make this record for MÖTLEY CRÜE fans, but for country fans who are also rock fans," said MÖTLEY CRÜE bassist Nikki Sixx. "I believe that there's going to be a lot of synergy and excitement for MÖTLEY CRÜE fans hearing different artists covering their favorite songs. People will be surprised how these artists made the songs their own and we couldn't be happier with how the album turned out. It's been an amazing, positive experience and, as a lot of things we've done, a first in our career."

"It has been a blast becoming friends with the MÖTLEY guys and learning how much they appreciate the history of country music," said Justin Moore. "They are truly one of the most disruptive bands of their generation and I am honored to be able to cover one of my favorite CRÜE songs of all time, 'Home Sweet Home'. It has been pretty unreal singing with Vince Neil."

The record is a joint venture between Big Machine Records — home to country superstars such as Taylor Swift and Tim McGraw — and Mötley Records and Eleven Seven Music. Big Machine label group president and CEO, Scott Borchetta, is among the legion of country music fans who love MÖTLEY CRÜE. Borchetta said of the collaboration, "I have been a not-so-secret CRÜE fan from the beginning. When manager Chris Nilsson called with the idea for a tribute album on Big Machine Records, it was an immediate 'yes' from me! Our album will highlight just how great the MÖTLEY CRÜE song catalog is. At the end of the day, that's what will stand the test of time."

Neil and Sixx talking about CASSADDE POPE' version of "The Animal In Me":

Neil and Sixx talking about THE MAVERICKS' version of "Dr. Feelgood":