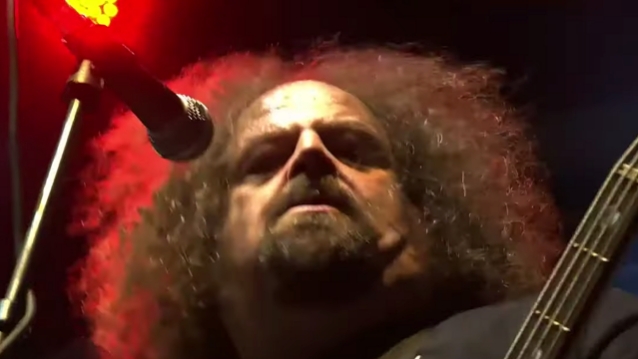 Professionally filmed video footage of NAPALM DEATH's entire June 28 performance at the With Full Force festival at Ferropolis in Gräfenhainichen, Germany can be seen below (courtesy of ARTE Concert).

NAPALM DEATH is continuing work on its long-awaited new album for a tentative early 2020 release. The follow-up to 2015's "Apex Predator - Easy Meat" will feature an appearance by guitarist Mitch Harris, who has been taking a leave of absence from NAPALM DEATH since late 2014 to focus on his family life.

NAPALM DEATH frontman Mark "Barney" Greenway recently issued the following update on the new disc's recording sessions: "[The new album] is coming, we promise. Unforeseen circumstances and [busy] touring schedule have conspired to string it out quite a bit. It's gonna be a multi-faceted rasper, though, I think. Some nice 'n' quirky cover songs too. All will be revealed soon — just getting on with artwork and last couple of lyrics and all the usual window dressing. Alongside that, if it comes off, a nifty associated split release with a very-definitely-not-grindcore band is in the planning, which will neatly skip around convention and stereotype. And why not."

NAPALM DEATH will team up with MUNICIPAL WASTE for a co-headlining U.S. tour. The 17-date trek will kick off in Dallas on October 3 and visit New York, Chicago and Denver before ending on October 23 in Los Angeles. Opening the night are New York hardcore legends SICK OF IT ALL and hardcore punk/thrash metal band TAKE OFFENSE.