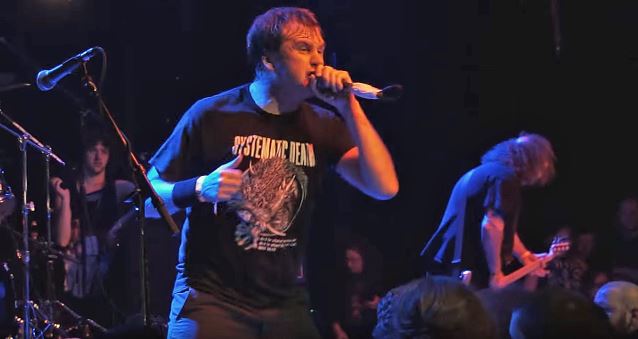 Slave To The Grind was contacted by NAPALM DEATH to shoot and edit the live portion for the band's "How The Years Condemn" music video, which was released last September. The Slave To The Grind cut of the clip, which is composed of live footage shot in North America by Doug Brown, can be seen below.

"How The Years Condemn" is taken from NAPALM DEATH's 15th studio album, "Apex Predator - Easy Meat", which was released in January 2015 via Century Media Records. The CD's striking artwork was created by Danish designer Frode Sylthe (Friktion.com), who has previously worked on the band's "Utilitarian" album as well as with such other acts as AT THE GATES, TOTALT JÄVLA MÖRKER, THE HAUNTED and BURST.

Said NAPALM DEATH singer Mark "Barney" Greenway: "Subject-wise, I think this is one of the more open-ended of the tracks that we have in the sense that everybody has their own ideas toward living a vibrant and fulfilling life.

He continued: "Don't misunderstand, this is not an anti-alcohol / intoxicant song — as some might conclude — but more to understand that any form of stimulant that controls us rather us controlling it (from TV to drugs and many things inbetween) really can impair and reduce the quality of life that is possible for our finite time on earth."

Added NAPALM DEATH bassist Shane Embury: "'How The Years Condemn', I guess, is a term that's used for many reasons. For me, I first heard it from a guy who later became a friend of mine in a hospital bed next to me three years ago, as we passed the time talking about why we had both ended up there! It was at that point and then the following six days afterwards that I said to myself that enough was finally enough! I thought about how lucky I was to be doing what I had always dreamed of doing, and in doing so, the awesome people, friends and loved ones that I had met and who now accompany me on this strange journey called life. To my loved ones, I realized I had been selfish and it was time for a change, a realization that we are not invincible nor are we indestructible."