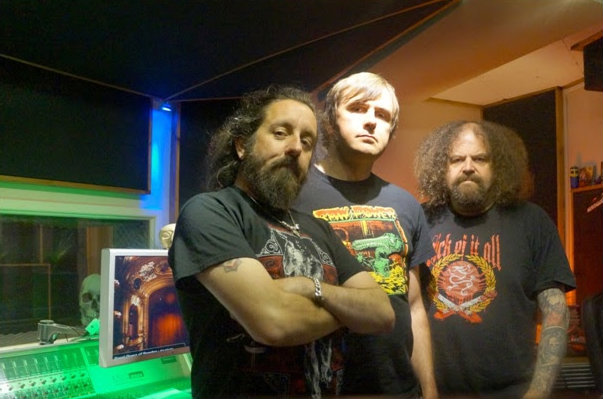 British grindcore legends are continuing work on the follow-up to 2012's "Utilitarian" album for a tentative early 2015 release via Century Media.

Commented vocalist Mark "Barney" Greenway: "When we say that we've been working on the album recording for nearly a year, people might be thinking that this all sounds a bit too extravagant for grindcore-type behavior. The full story is, though, that we've been recording it in segments to try and achieve varying types of sonic assault.

"There is a belief in certain quarters that you can only do so much with our particularly noisy strain of music. We think otherwise, so as well as a few stylistic quirks on the album (that are sometimes happy accidents), generally it's rawer, perhaps a little looser and of course always dense, nasty and, hopefully, invigorating too. Certainly not more polished — yuk!

"[Producer] Russ Russell helped us to give lots of people headaches down the years. He doesn't mind us adopting certain, erm, techniques with studio equipment that most producer-engineers would find somewhat distasteful. So back we went again with Russ to Parlour Studios in the comparatively serene surroundings of Northamptonshire to do damage.

"There's possibly some of the fastest and spazziest stuff we've ever done and, on the other end of the scale, some of the weirdest, most oppressive and adventurous no-wave-type stuff too.

"Some song titles for you to chew on: 'Copulating Snakes', 'Dear Slum Landlord' (aired at Roadburn 2014; see video below), 'What is Past Is Prologue', 'Stunt Your Growth'.

In the meantime, NAPALM DEATH continues its restless and relentless worldwide touring campaign, which includes a tour of South America, appearances at Philip Anselmo's Housecore Horror Film Festival and at SLIPKNOT's own Knotfest in the U.S., European dates, as well as a tour of Japan with BRUTAL TRUTH.

"Utilitarian" sold around 2,200 copies in the United States in its first week of release, according to Nielsen SoundScan. The CD debuted at No. 14 on the Top New Artist Albums (Heatseekers) chart, which lists the best-selling albums by new and developing artists, defined as those who have never appeared in the Top 100 of The Billboard 200.