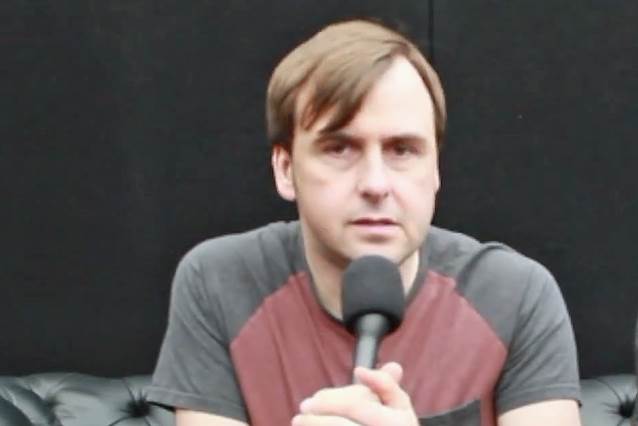 At this past weekend's edition of the U.K.'s Download festival, NAPALM DEATH frontman Mark "Barney" Greenway confirmed to TotalRock Radio that guitarist Mitch Harris, who has been taking a leave of absence from the band since late 2014 to focus on his family life, will be involved with NAPALM DEATH's next record.

Regarding the progress of the writing and recording sessions for the follow-up to 2015's "Apex Predator - Easy Meat", Barney said: "The new album, realistically, is not gonna be out till next year. But we are working on it now, so it's going places — it's definitely developing quite nicely. It will be, as NAPALM albums have gone down the years, it's very definitely NAPALM, but it's also moving forward steps musically — lyrically too. So, yeah, hopefully people will like it when it eventually surfaces."

Earlier in the year, NAPALM DEATH bassist Shane Embury told Christina Rowatt of Australia's The Void about the band's new material: "It's fast, but there's also a lot of some, I don't want to say 'experimental,' but hopefully once it's done it will go in a few different directions. I don't want to say noise, but there will be some stuff like that, a couple of mid-paced, kind of KILLING JOKE-influenced [songs]. Hopefully we'll veer off in a few directions and it will make the album… it will still be abrasive, but not constantly fast all the time. There is some extremely fast stuff, but we've all been kind of like ticking away at every album, trying a little bit of that and little bit of that, so each step, this one will be the most diverse yet, I hope."

NAPALM DEATH will support SLAYER on the second U.S. leg of the latter band's final world tour. The 20-date trek, which will kick off on July 26, will feature additional support from LAMB OF GOD, ANTHRAX and TESTAMENT.