UK death metallers NAILED have set a November 3 release date for their long-overdue second album, "Hatred, Failure & The Extinction of Mankind". The CD is the band's debut for Anticulture Records and sees worldwide distribution through Plastic Head.

Commented the group: "We finished up recording and mixing this album back in July 2007, then we started shopping it to labels. In the middle of this, our guitarist left who we replaced with Jim, before getting picked up by Anticulture in late 2007/early 2008 and they set a May release date. During this time the artwork that we had for the CD was bought by Sony BMG, rendering it useless to us, so we had to get the artwork re-done by Marcelo HVC. This delay gave us the chance to remaster the album at the label's request and remove some samples that we were struggling to get clearance for, but lo and behold when we went back the studio had deleted the audio! Luckily, Andy Giblin had the rhythm guitars and drums saved in his personal archive, so we re-recorded the bass, vocals and solos in June of this year, remixed the album and remastered it. It sounds a whole lot better but it's been 18 months in the making, so we hope you fucking enjoy it!"

Audio samples are available at www.myspace.com/naileddeathmetal. 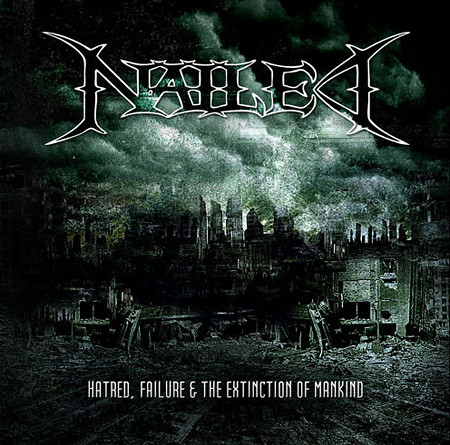