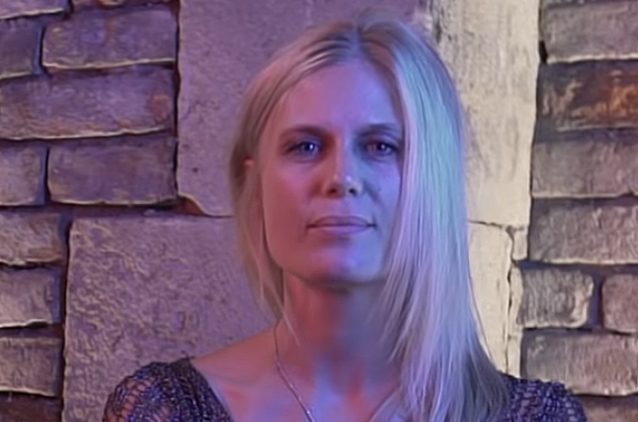 Metalshop TV conducted an interview with Danish post-black metal multi-instrumentalist and vocalist Myrkur (real name: Amalie Bruun) at this year's Brutal Assault festival, which was held last weekend in Jaromer, Czech Republic. You can watch the entire chat below. A few excerpts follow (transcribed by BLABBERMOUTH.NET).

On what inspires her:

Myrkur: "My main inspiration is mostly to be out in nature and to experience it and the silence, the beauty, the brutality, all the different aspects of Mother Nature in general. Also, older fairy tales, sagas, that kind of stuff. I guess as a whole genre, folk music from Scandinavia is one of my biggest inspirations. I suppose the '90s Scandinavian black metal scene as well. Most people know this if they listen to my music, they can probably hear the inspiration. Yeah, it would be too many to mention right now."

On why classical music resonates with her:

Myrkur: "The melodies, the narrative, the storytelling, the masterful execution of the instruments. I started my musical life by playing violin, so I think it will always have a very special connection to my upbringing. I don't know why it makes me feel closer to something divine, I think certain artforms can do that to you. Other artforms just give you, you know, you feel good or strong or bad or scared, but classical music makes me feel something divine. Not every composer, of course."

On the song "Måneblôt", which is taken from her 2017 "Mareridt" studio album:

Myrkur: "The song in itself is sort of about this concept of 'blôt', the sacrifice, it could be anything from a salute to the gods or hope for a better year or love or pregnancy or something. This one is 'måne' for the moon and 'blôt'. Musically, when I started writing it, I was considering it more in a doom riff, with slow drumming, but then we came to the studio, it just started to make sense to be, in collaboration with Randall Dunn, who produced it, to see it as this kind of arrow that went really fast and there's not a lot of dynamics. It's just like a light that goes and that was way better for blast-beats than doom, obviously. That's how it became more and more that. I wanted to break it down and add this very folk, traditional piece with the nyckelharpa and the goatskin drums and all that stuff."

On the meaning behind the "Mareridt" album title:

Myrkur: "Old songs, they came about from nightmares that I had. I was extremely tormented at the time by nightmares, night terrors, at the time where I came to think, 'Okay, I'd like to write a new record.' Then, it came together with waking up every day from a horrible nightmare and screaming and just not knowing what to do with these bad dreams or how to even analyze them or get better. So, just write them down and go about it in a folk, traditionally way where you have a drone-y, mainly it will be B minor and I would start singing about the nightmares and that's the root of how they came up. All the songs turned out to be like that. It was very, very personal, a bit therapeutic to me. So, that was good."

On whether she's past the criticism from hardline black metal fans that she's not "true" enough for the style:

Myrkur: "I don't really care. I guess, at the risk of sounding arrogant, I take it a little bit as a compliment at this point. For example, we played a festival in Eastern Europe and it was a pagan festival and actually, in the front row was this guy, or maybe two guys, even, that I didn't notice, but everyone else noticed during the set and they were doing this [displays middle finger] the whole show, front row. I was kind of sad that I didn't see it, but I've seen videos, so I know it's true, I know they didn't make it up. They did it this whole show and they were so dedicated to flipping me off, the whole concert. That's a long concert. I think maybe their arm… they were so dedicated. I think that my band thought maybe I would be sad, but I was kind of like, 'Wow, it's almost impressive, this kind of dedication.' I respect passion, even if it's against me, I will say that. I think we need passion today, even if it's hate toward me or whatever it's what I do and stand for in their mind, I think it's good."

On whether she has started work on the follow-up to "Mareridt":

Myrkur: "I am actually working on a few songs that I want to put out sooner than later that won't necessarily be a part of a whole record. It may only be two songs. I'm going to do my first headline tour in December in Europe, so I want to send out something new for the supporters and maybe try that out live as well. Then, then the next real full-length record will mostly likely be a dark, acoustic folk record. It will be a bit different, but still with Relapse Records. It's a nice mix of everything that I've done so far. I need to try and put that into one thing."

Bruun has been subject to harsh criticism from the black metal scene after it was revealed she began her career as a singer in the indie pop rock band EX-COPS. In spite of her musical past, she has stated in interviews that she has always been into black metal.