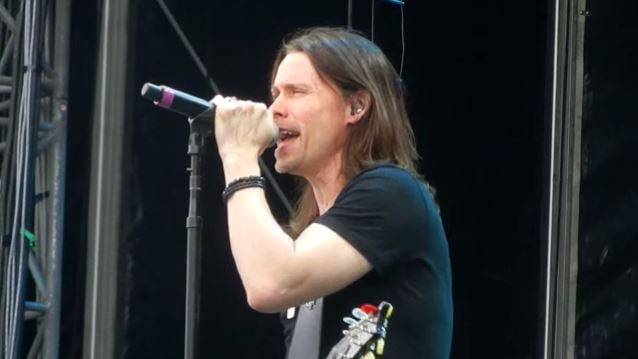 ALTER BRIDGE singer Myles Kennedy, who is currently pulling double duty, playing and touring with that group while also fronting the backing band for VELVET REVOLVER/ex-GUNS N' ROSES guitarist Slash, was asked by Lisa Martineau of NewHampshire.com if he sometimes forgets whom he is on stage with. "I definitely forget what month it is," Myles laughed. "That happens all the time! But, no, not really. I think that both bands are so different. That's part of what keeps it exciting for me, is that they are very different mindsets for me, musically. That keeps it from getting redundant. By the time I feel like I'm firing on all cylinders and trying to raise to the challenge on the specific tour, then that tour ends up winding down, and I'm with the other band and I have to turn the dial a different direction. There's a certain amount of work and a certain thought process that has to happen for me to get on the stage, to get up there. And it's a challenge, which is good."

Kennedy also outlined the differences in the writing approaches between the two bands. He said: "It's a different process. The songwriting with Mark [Tremonti] and ALTER BRIDGE is… It's more like making a puzzle, where we stockpile a lot of different riffs and melodies and chord progressions, and we kind of set those aside and we go, 'Okay, I've got this riff. Do you have a chorus that goes with this or a riff that goes with this chorus? Whereas with Slash, he'll come in with a music bed and say, 'Okay, now put your melody and your lyric to this.' It's like you're handed a canvas to paint on. They are just totally different approaches, which I love."

Slash recently told Rocksverige.se that he was blown away with Myles Kennedy the first time he ever heard his voice, saying, "I had never met him before, I had just heard about him. I didn't even know what he sang like. I asked him to sing a song on my (first) solo record with all the different singers, and he was fucking great. Then we met, he came to L.A. and we recorded the studio version of 'Starlight'."