The conflict between alleged blasphemy and freedom of speech is common place within the context of extreme music, but for English doomsters MY DYING BRIDE it has led to some unexpected attention, namely from the Syrian government. Speaking to the U.K.'s Zero Tolerance magazine on the cusp of the release of new album "For Lies I Sire", guitarist Andy Craighan said, "We were offered some gigs out there [Syria] and we got a list of lyrics we wouldn't be able to sing because of their religious content. It basically made a mockery of our songs... it was like the CIA blacklisting all of our words. We realized that we were quite anti-religious and it was a bit of an eye-opener when the government came back saying, 'This band can't play in our country because of their forthright anti-religious stance.' It was mainly songs like 'The Cry Of Mankind' that upset them. We usually play it because it's a favorite of ours. Once they'd latched onto that and a couple of others, we didn't have a show to play! I don't think the songs that we write are particularly blasphemous, but other people really do. I can reel this stuff off without even knowing it, but for some people it's horrifying! I don't even realize I'm doing it!" Turning to the tendency within Western extreme music to target Christianity specifically, Andy comments, "With Christianity we can attack all religions by using it as the pinnacle but all of them are effectively the same. Everybody knows it...We don't genuinely mean any harm, we just want to rattle the cage a bit and say, 'Look, [religion] isn't everything you think it is.' The idea of blowing yourself up just so you can be with 12 people who've never had a shag sounds ridiculous to me! I'm gonna get 12 virgins? They're the worst shag ever! You want someone filthy!"

The role of religious imagery — blasphemous or otherwise — in extreme music forms the core theme of the current issue of Zero Tolerance magazine. BLUT AUS NORD and HELLSAW discuss the differing ways in which black metal embraces blasphemy, while CANDLEMASS' Leif Edling opines on the appropriation of Christian imagery by classic doom metal bands, his own included. Calum Harvie, editor of Zero Tolerance magazine said, "If we take blasphemy to mean the deliberate crossing of the divide between what a society considers to be sacred and profane, then it's no wonder that it is commonly expressed within extreme music which, likewise, tests and challenges the boundaries of what is considered by others to be sonically unacceptable. And even though blasphemy is technically no longer illegal in the U.K., it doesn't take a great deal of awareness of current affairs to realise that mocking or parodying a religion isn't without its risks. That's why this issue of Zero Tolerance hones in on the fine art of blasphemy, seeking to examine the extent to which it is embraced in extreme music, as well as the implications it has for freedom of speech." 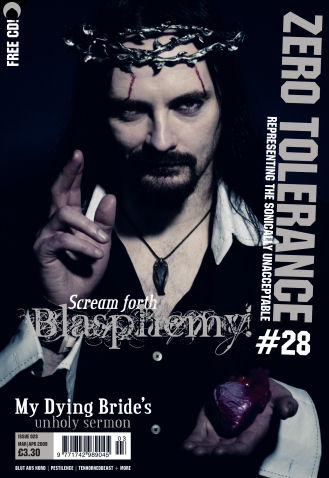