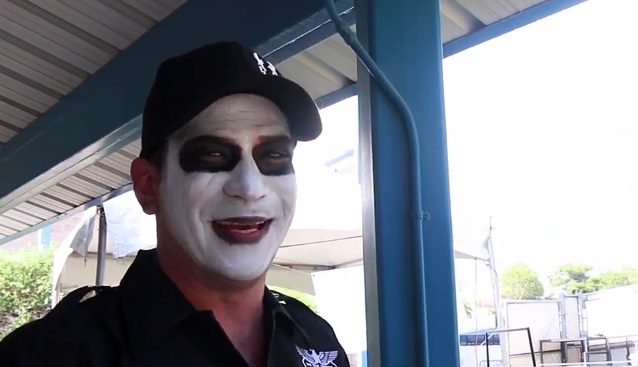 AlternativeNation.net recently conducted an interview with MUSHROOMHEAD's Jason Popson (a.k.a. J Mann). You can now watch the chat below.

Asked about SLIPKNOT frontman Corey Taylor's comment in a May 2014 interview that Taylor wanted to bring together four bands that wear either masks or make-up — his own act, plus MUDVAYNE, GWAR and MUSHROOMHEAD — for one mega-tour of masked rockers, Popson said: "I would love for that to happen. I actually just saw Knotfest is coming here, and I wanna know, Corey, why didn't we get a phone call, man? We'd love to be a part of anything with them."

He continued: "A lot of the media has misguided or created some type of friction or feud between us, and it's all misguided.

"Years ago, I met Sid [Wilson, SLIPKNOT DJ] and Paul [Gray, SLIPKNOT's late bassist], and we talked about it; we actually laughed about it. And a lot of that was just people trying to sell magazines, or whatever. But we've always respected that band and I think they're phenomenal players, and I would love to play with them; I would love the opportunity.

"I think it's really big of him to even throw that out there to the media, because of everything that's been said back and forth — which, I'm sure, 99 percent was never said. People take shit out of context or whatever. But I think SLIPKNOT's awesome and I would love to tour with them, absolutely."

Regarding the possibility of a SLIPKNOT tour with MUDVAYNE, GWAR and MUSHROOMHEAD, Taylor said: "I'm working on that… honestly. It probably won't happen right away, just because [SLIPKNOT's] been gone for awhile and we have all these changes, and we've got a new album coming out. So we want to kinda take the first six or seven months and just kind of re-establish ourselves."

Taylor added, however, that the tour is "one of the things I want to do, like for real. Honestly now, especially now since [GWAR vocalist Dave] Brockie's dead — that was one of the guys that I really wanted to tour with… Hopefully sooner than later we will see what happens."

Taylor first broached the subject of this tour in late 2011, when asked by a fan about a reportedly long-running feud between SLIPKNOT and MUSHROOMHEAD. Taylor said at the time, "My problem has never been with that band, my problem was with their fans at the time. I would welcome it. I'd love to do something like that, you know."

The feud allegedly started in 2002 when SLIPKNOT played in Cleveland and had things thrown at them from the audience — whom SLIPKNOT believed were put up to it by MUSHROOMHEAD.

MUSHROOMHEAD and GWAR are still active, the latter despite the death of founder Dave Brockie this past spring. MUSHROOMHEAD just issued a new album in May. MUDVAYNE, however, is in limbo. Singer Chad Gray and guitarist Greg Tribbett have been playing with HELLYEAH, although Tribbett was recently fired. There has not been a new MUDVAYNE album since 2009.

SLIPKNOT is currently working on a new studio album for a tentative late 2014 release.

The band's first all-new CD since 2008's "All Hope Is Gone" will also be its first since the 2010 death of Paul Gray and the late 2013 dismissal of drummer Joey Jordison, both founding members and primary songwriters.