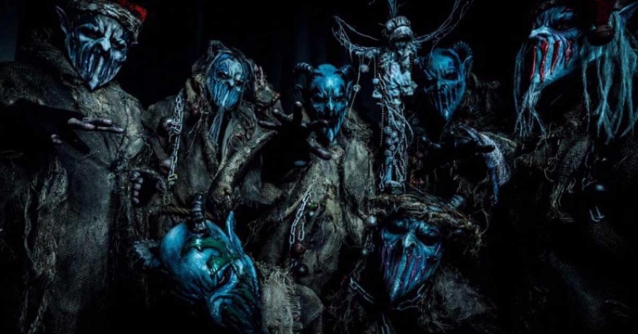 MUSHROOMHEAD drummer Steve "Skinny" Felton was recently interviewed by Ned of the Waterloo, Iowa radio station Rock 108. The full conversation can be streamed below. A few excerpts follow (as transcribed by BLABBERMOUTH.NET).

On the group's recently released, "Evil Dead"-inspired music video for the song "We Are The Truth":

Skinny: "I can't take single-handed credit for that. The entire camp is pretty well versed in horror and all that kind of stuff — sci-fi, video games, cosplay, all that kind of stuff. That whole world used to be a massive subculture; now, it's everywhere in the culture. We're huge horror movie fans over here, so when time came to throw some video treatment ideas around, I kind of perked up and said, 'Hey, we should do an 'Evil Dead' tribute.' Everyone instantly got it, so we put our heads together and assembled a hell of a team, and we did a lot of the work ourselves, because we're still that DIY, underground camp. We took the time to get it right, to light it right, to script it out a little bit, to get the right makeup people, the right cinematographer, the right lighting, just to really, really focus on it. It's definitely a tip of the hat to the entire 'Evil Dead' franchise. I'm a giant fan."

Skinny: "You know, I've never had a chance. We've done quite a few horror conventions where he was there either the following day or the day before, and I've never actually been able to hook up with him and say, 'Hey, what's up? Huge fan.' I'd love to one day, because we definitely try to hit as much of the conventions as possible when we're not touring."

On his favorite horror movie:

Skinny: "Of all time, I've got to go with 'Jaws'. There's an actual fear there. I was young when it came out, so I never kind of looked at the water the same. Being from Cleveland and Detroit, we grew up on the lakes — and I know there's no sharks in the lakes [laughs], but it's so weird when you can't see. That, to me, is way more of a fear that preys on the horror stuff."

Skinny: "That has quite a bit of variety to it. It's basically covering the last three and a half years of touring, so almost every bit of the music is from 'The Righteous & The Butterfly' album. There's probably six, maybe seven videos that haven't been pre-released. We did some really cool stuff with our live footage. We took a different approach and used a lot of slow-mo footage — very macro, kind of close-up stuff that's not really typically seen as far as your typical band live DVD. What we ended up doing was remixing songs off the album in little 30-second clips to go along with this slow-motion video. It's all-new remixed audio to complement the slow-motion stuff. There's a lot of variety – there's remixes and different mixes to go along with all the stuff we ended up filming. There's a lot of stuff that isn't typically seen — so much behind-the-scenes stuff. There's definitely something for everyone."

On when to expect the band's new album:

Skinny: "We have already begun [writing]. It's popping off on its own. Some of the stuff is writing itself. If everything goes right, you'll see maybe late spring 2019 a brand new MUSHROOMHEAD record. If things really stay on schedule, we'll have a single out for Christmas, maybe a possible video. We've got some work to do, but we're also sitting on some material that we feel is really strong. We've been working on stuff on and off over the years between doing the videos and all the touring. People ask a lot, 'Why do you guys take four years in between albums?' It's not by choice; it's out of necessity. We have eight people in the band and twelve people in the crew. We've got to do a lot of touring — we've got to tour twice as much as a four-piece band to make the same amount of money. That's kind of the big reason it takes us a little bit longer. We've got to tour to keep the lights on."

On the effect of the departure of longtime vocalist Jeff "Jeffrey Nothing" Hatrix:

Skinny: "It's always cool to do new things with new people and not necessarily know what you're going to get. This will be MUSHROOMHEAD's eighth album, so I definitely don't want it to sound like everyone expects. I'm definitely looking forward to doing more experimenting. The unknown is really cool. As we write, we're creating stuff that we've never heard or felt before. It's really, really awesome. In the long run, everything always ends up really dark. Everything's always creepy. Everything's always got some sort of sound design element to it that's not your traditional guitar lick or keyboard sound — there's something odd about it. The creepiness is never going to go away. As far as the live show, it's super high-impact, high-energy. We're playing stuff that we haven't played in a while, and it feels really good to get out and get back to our roots. We're playing some earlier stuff right now, and the tour's been going really well."

For the past several weeks, MUSHROOMHEAD has headlined the "Summer Of Screams" tour, presented by Scream Factory and Dread Central. The trek wraps up tonight (Saturday, September 15) in Joliet, Illinois.

Church's exit from MUSHROOMHEAD came only a day after Nothing said he was leaving the Cleveland, Ohio metal band he co-founded in 1993 with Felton.