An exclusive, one-night-only screening/premiere of MUSHROOMHEAD's new DVD, "Volume III", will be held on Wednesday, August 15 in the band's hometown of Cleveland at the Cedar Lee Theatre (2163 Lee Rd., Cleveland Heights, Ohio 44118). The screening will begin at 10:00 p.m. and runtime is just under two hours. Tickets are $25 and are available for purchase here.

Producer/drummer/founder Steve "Skinny" Felton says: "Members of our team originally wanted us to do this premiere in L.A. or New York, but Cleveland is our hometown and we want to represent! Our local fans are the people who made us who we are today, and this is a once-in-a-lifetime event. I'm excited to see how 'Volume III' translates to the big screen... we've never done this before, so it's an entirely new version stage fright, ha! Good thing Cedar Lee has a bar!"

The following day on August 16, MUSHROOMHEAD will take part in a special DVD signing at The Exchange in Parma Heights, Ohio (6277 Pearl Road - in the greater Cleveland area). The signing will take place from 7:00 p.m. until 10:00 p.m. and will feature the band members in full costume. Please note that DVDs will be available for purchase at the signing, and a DVD must be purchased for access to photos and autographs with the band.

"Volume III", the follow-up to the widely acclaimed DVDs "Volume 1" (2005) and "Volume 2" (2008), is set to hit retailers on August 17 via Megaforce Records and will feature over 90 minutes of new material — including stunning new music videos, backstage antics, and exclusive never-seen-before content. 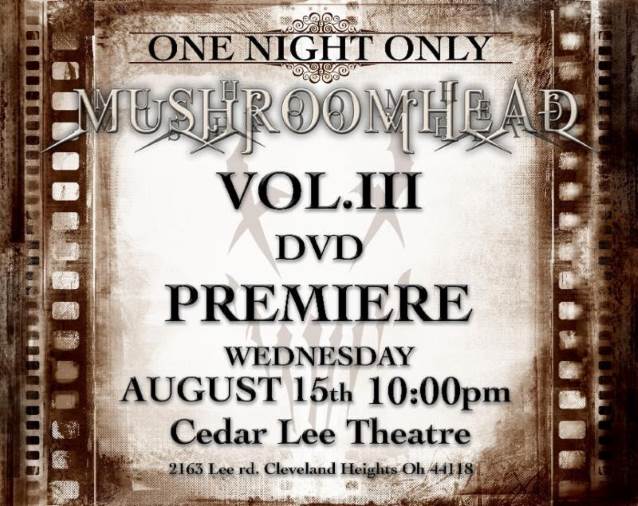