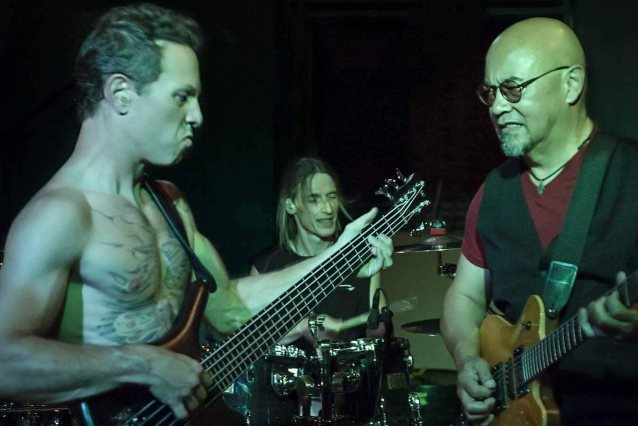 "Mission Possible", the new song from SOFTEN THE GLARE, the band featuring MUDVAYNE bassist Ryan Martinie alongside guitarist Bon Lozaga and drummer Mitch Hull, can be streamed below. The track will appear on SOFTEN THE GLARE's debut album, which is being produced by Jamie King (BETWEEN THE BURIED AND ME) and is tentatively due in March. Fans can pre-order the CD and get the new single, a bunch of perks and help fund the new record through PledgeMusic. People can get gear, swag and even time with the band in the studio.

When Martinie and Lozaga first met in Los Angeles and started talking about getting together to create some music, they didn't know what to expect. Now as SOFTEN THE GLARE, their music is evolving and constantly changing, bringing in elements from both their worlds and others. Currently their music is headed in an instrumental jazz/rock direction with elements of metal, funk, prog and a touch of chaos.

Martinie is known for his bass playing and songwriting for MUDVAYNE. Numerous world tours (including a stint with KORN), MTV awards and millions of records sold are part of his musical heritage. Bon Lozaga (GONG, TINY BOXES) is known in the jazz/rock world and jamband scene (playing with MOE. and UMPHREYS MCGEE) and has released over a dozen albums featuring such noted guests as Allan Holdsworth, Kai Eckhardt, David Torn, David Fiuczynski, with his various projects and has also toured throughout the world.

It's been seven years since MUDVAYNE released its self-titled fifth album, which was barely promoted and sold weakly upon release.