Voragos: Destination Lunasea Beach has announced several exciting additions to the lineup for the private island festival and five-day rock cruise coming in early 2022. The list of newly added acts includes the recently reunited MUDVAYNE (which continues to partner with Danny Wimmer Presents for their first live performances after a 12-year hiatus), ATREYU, CROWN THE EMPIRE and AFTERLIFE.

MUDVAYNE will play both on board and at Lunasea Beach and will replace CHEVELLE who regrettably have to cancel their Voragos Lunasea Beach appearance due to a conflict with their upcoming touring schedule. All other previously announced acts will be appearing, including ROB ZOMBIE, MASTODON and more.

"I still can't believe I'm saying…MUDVAYNE IS BACK," says Chad Gray of MUDVAYNE. "It's been a long time coming. We are very excited to get back on stage in front of all the OG Oxygen Wasters and the New Ones that have NEVER seen us! We're looking forward to being on the maiden voyage of DWP's Voragos cruise. Let's Go!"

The anticipated rock festival vacation experience — which takes place February 16-21, 2022 aboard the amenity-packed Norwegian Pearl Ship and will be docking for one day in Belize for a one-of-a-kind private island beach festival — now has an official host with SiriusXM's Jose "Metal Ambassador" Mangin coming on board to emcee the event and host various activities with fans and bands.

"I'm far beyond stoked to be hanging and partying with so many friends and family on Voragos, and getting to host it is even better," comments Jose Mangin. "This destination cruise is going to be one for the record books for sure! A festival on the beach, and concerts on board, it's so badass! I can't wait to throw down hard with you and my metal shipmates in MUDVAYNE, MASTODON, ATREYU, my AZ homies DED, ROB ZOMBIE and so many others!"

Voragos will also include special appearances by SiriusXM's Shannon Gunz and the cast of "That Space Zebra Show", who will be participating in special fan experiences throughout the cruise. This fall, "That Space Zebra Show" will launch the "Battle For The Big Seas" showdown on the DWPresents Twitch channel, where unsigned bands will compete for the chance to perform on the inaugural voyage of Voragos. Look for more details about how to submit and enter the contest coming soon.

In addition, Voragos is excited to announce the first on ship experiences that fans can participate in. The first revealed theme night is "Party Like A Rockstar", where cruisers can dress up like their favorite artist. Confirmed cruise activities include: Pool Deck Party with DWP CEO Danny Hayes, Rock N' Roll Trivia hosted by Jose Mangin, Show Us Your INK Mixer, Flip Cup Tournament, Beer Pong Tournament and exclusive to Voragos Founders Club Members, a Daily Bourbon Tasting with DWP Team Members. Many more theme nights, activities, meet & greets, as well as additional exclusive Founders Club events will be announced in the coming months.

The Lunasea Beach Festival (February 18) — available exclusively to cruise guests (no separate tickets will be sold to the public) — will include an exclusive headlining set by ROB ZOMBIE along with performances by MUDVAYNE, BLACK STONE CHERRY, NEW YEARS DAY, TETRARCH and AMIGO THE DEVIL.

Additionally, the ship will be home to the Voragos Storytellers Stage, featuring intimate performances from AMIGO THE DEVIL, Kevin Martin (of CANDLEBOX), Brett Scallions and Austin Meade, as well as the Voragos Comedy Stage with multiple sets from Jim Breuer, Big Jay Oakerson, Rachel Feinstein and Shayne Smith. Each night will also offer a Midnight After-Party starring Brass Against, The Voragos Shut Up & Dance and more.

Departing from Miami, Voragos will be the ultimate vacation of every rocker's dreams, with more than 45 performances across five total stages, both on board and on the beach. Most bands will be playing multiple sets throughout the five-day excursion as well as participating in additional activities.

Cabins are on sale now at www.voragos.com with pricing starting at just $898 per person for a four-guest interior room (plus taxes and fees). Guests are able to make a deposit and pay the remaining balance in monthly installments over time leading up to the event.

Voragos: Destination Lunasea Beach is the creative partnership of Danny Wimmer Presents and Sixthman, merging the expertise of the best in rock festivals on land and the leaders of rock at sea. Like each company's signature events, Voragos merges the signature world-class talent and unrivaled immersive festival experiences that each has become respected for throughout their decades in business.

The luxurious Norwegian Pearl will serve as the floating venue for this rock adventure. Guests will be able to enjoy Norwegian Cruise Line's signature freedom and flexibility to choose between 11 onboard bars and lounges, 15 dining experiences, a casino, one outdoor pool, hot tubs and a full menu of spa treatments.

Over the coming months, Danny Wimmer Presents and Sixthman will be working with Norwegian officials to assure the destination event conforms to then-current social distancing protocols. 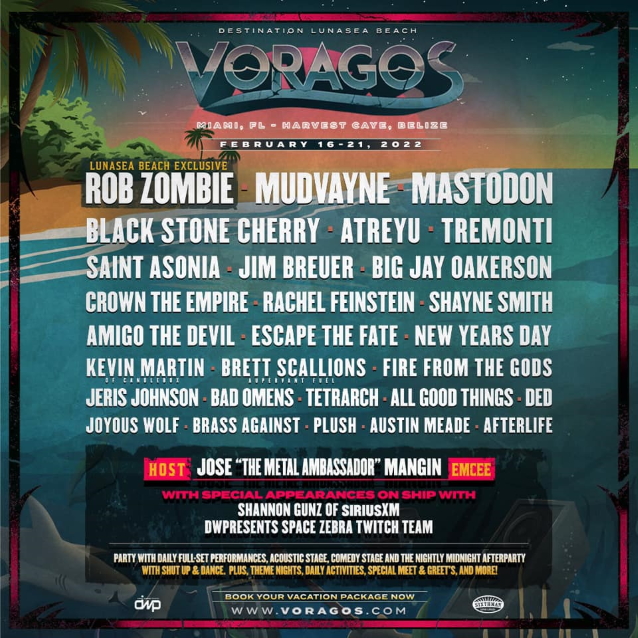