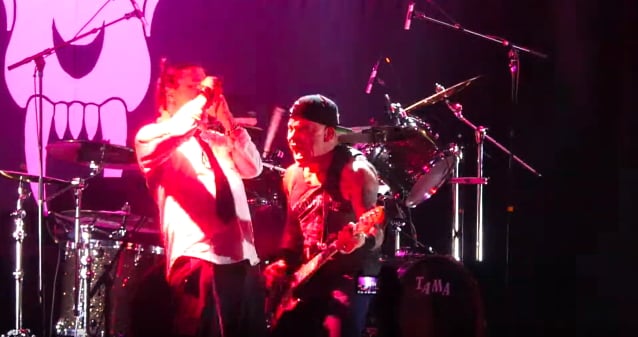 MR. BUNGLE was joined by CRO-MAGS founder Harley Flanagan on stage during the Mike Patton-fronted band's concert Monday night (February 10) at Brooklyn Steel in Brooklyn, New York. Together, they performed a high-energy rendition of the CRO-MAGS classic "Malfunction", with Patton and Harley sharing lead vocals.

The Brooklyn concert took place five days after MR. BUNGLE played its first show in close to 20 years at the Fonda Theater in Los Angeles, California. Both gigs saw the Eureka-born band performing its 1986 demo in its entirety, and marked the first time these songs have been played live in over 30 years.

When the MR. BUNGLE reunion was first announced last year, Spruance said: "Ever since Trevor hatched 'The Raging Wrath Of The Easter Bunny v.2' idea a few years back, Patton, Lombardo, he and I had each been incubating some idea of that egg. Lombardo called me one day and asked me to make some guitar demos so he could learn the songs. He had this generous idea to surprise the other guys with being totally ready to go with the tunes. It just so happened that I was in Eureka at the time. So, I found myself revisiting all of those riffs in the same goddamned town and in the same goddamned house where I recorded all the original guitars on that demo 33 years earlier. There was something about actually physically working out the mania of those riffs again at Dave Lombardo's request, in that environment — it just split my head open. It wasn't long before the train of destiny had picked up too much speed for any of us to jump off."

The idea that Dunn, Patton and Spruance are being joined by their early musical heroes is not lost on the musicians.