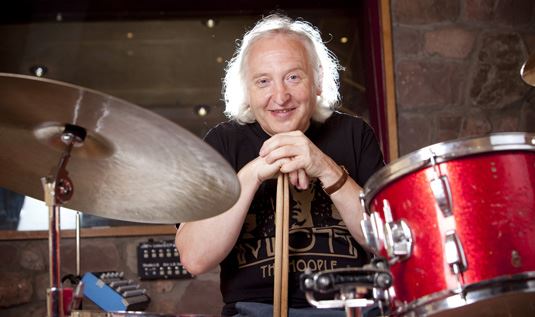 Dale Griffin, the drummer and co-founder of the British glam-rock band MOTT THE HOOPLE, has died at the age of 67 after a long battle with Alzheimer's disease. He passed away in his sleep on Sunday night, said Peter Purnell from Dale's record label Angel Air.

Born in Ross-on Wye, Herefordshire, Griffin attended Ross Grammar school and played in a number of local bands with his lifelong friend Overend Watts and it was during this time he gained the nickname "Buffin." Among Dale's bands were THE SILENCE, CHARLES KINGSLEY CREATION and THE DOC THOMAS GROUP. Changes to that lineup occurred in 1968 and keyboard player Verden Allen joined the band and changed its name to THE SHAKEDOWN SOUND. In 1969, they moved to London and came to the attention of record producer Guy Stevens. Ian Hunter was chosen as their lead singer and MOTT THE HOOPLE was formed.

Following the departure of Hunter in 1974, Griffin, along with Watts and Morgan Fisher, formed MOTT with Ray Majors and Nigel Benjamin. In 1976, following the departure of Benjamin, the remaining members regrouped as BRITISH LIONS with former MEDICINE HEAD singer songwriter John Fiddler until their demise in the late '70s when punk hit with a vengeance.

During the '80s, Griffin and Watts formed a production company and produced albums for HANOI ROCKS and THE CULT as well as hit singles such as DEPARTMENT S's "Is Vic There?". Dale then joined the BBC as a producer and produced numerous BBC Radio 1 John Peel sessions from 1981 to 1994, including PULP, SMASHING PUMPKINS, NIRVANA and ORCHESTRAL MANOEUVRES IN THE DARK. In the early 21st century, Dale oversaw the re-release of MOTT THE HOOPLE's entire back catalogue from both Island and CBS period, producing remastered versions and excellent informative sleeve notes.

At the age of 58, Dale was diagnosed with Alzheimer's disease just as he had worked tirelessly over the years to bring about the reformation of his beloved MOTT THE HOOPLE. In 2009, the band reformed for a five-night sellout Hammersmith Apollo 40th-anniversary concerts of the original five founding members. Having been just diagnosed, Dale only performed during the band encores with THE PRETENDERS drummer Martin Chambers, also from Herefordshire, and a friend playing the set and also covering for Dale on the 2013 MOTT THE HOOPLE tour.

Dale is survived by his longterm partner Jean Smith.