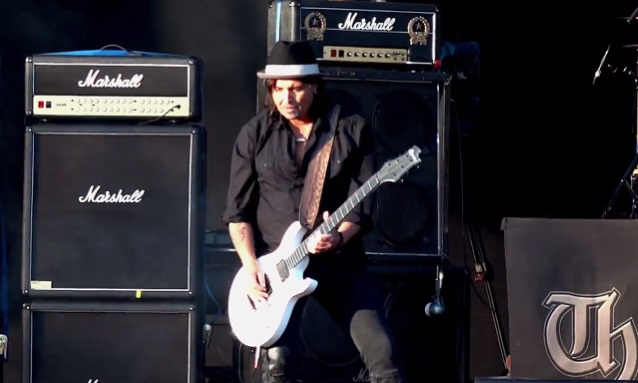 On July 4, Metal Hammer editor Alexander Milas conducted an interview with MOTÖRHEAD guitarist Phil Campbell for the "Metal Hammer" radio show on TeamRock Radio. You can listen to the chat using the SoundCloud player below.

Asked about the recent news report that a German heavy metal fan suffered bleeding in the brain after a night of headbanging at a MOTÖRHEAD concert, Phil said: "I read it on the paper in the paper on the train coming up [to MOTÖRHEAD's concert at Hyde Park in London]. That's just journalistic crap. It's nothing to do with [MOTÖRHEAD's classic song] 'Ace Of Spades' or music."

He added: "We don't have a problem with anyone. We just do our own thing. If people get into trouble while we're playing, that's their problem. It's a bad thing, but we don't try to get people to get into trouble or whatever."

The 50-year-old fan complained of a two-week constant headache while being treated at Hannover Medical School and told doctors that he had been headbanging regularly for years. A CT scan showed he suffered from bleeding — medically known as chronic subdural haematoma — on the right side of his brain.

Speaking to Metal Hammer magazine before MOTÖRHEAD's performance at London's Hyde Park, MOTÖRHEAD drummer Mikkey Dee said: "The first thing I thought [after hearing about the German metal fan] was, 'Oh, no! Poor guy.' Of course, we don't want anyone to get hurt at our shows. And it obviously had a happy ending and they made something, for us, quite positive for it, I guess. They said, 'It's confirmed, MOTÖRHEAD is the hardest-rocking band in the world.'"

He continued: "I feel for the guy. I'm sorry for him that he ended up getting [injured] that bad from being at a MOTÖRHEAD show. But I think we're gonna send him a hockey helmet and maybe a neck brace or something. He's gotta take it a little bit cooler."

Asked if he was surprised that something like this happened after a MOTÖRHEAD concert, Dee replied: "I'm not surprised at all, actually. This shit happens to us all the time. We said all these years that we're like 'Spinal Tap' and no script. If it is gonna be any band that ends up with these type of stories, it's obviously us. I'm not surprised. I just don't like when it's injury involved or people getting hurt, but if it does have a happy ending, yeah, I'm sure the guy can forgive us."