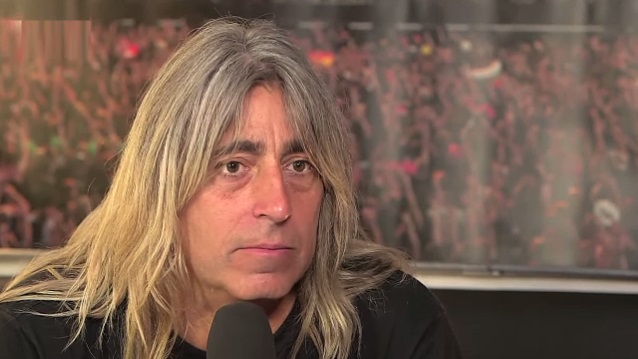 ARTE Concert conducted an interview with MOTÖRHEAD drummer Mikkey Dee at this year's Wacken Open Air festival, which was held July 31 – August 2 in Wacken, Germany. You can now watch the chat below.

Asked how he spent his time off from MOTÖRHEAD in the past year while the band's frontman, Lemmy Kilmister, was dealing with health issues, Mikkey said: "We have not had any time off, really, until this last year. It's very strange, actually, to have so much time off, so, yes, it was a bit awkward. But no problem. I started a little project that I call NORDIC BEAST with a couple of guys from the band EUROPE and my old bass player from KING DIAMOND, and a singer, Åge Sten Nilsen [of WIG WAM] . We've done a few shows just for the fun of it. And I've been taking care of the family. I've had some great time with the family — more time — and even they wanna kick me out now. 'Aren't you going on tour, Dad?' 'Yes, I am soon.' Other than that, I've just been trying to take care of myself and play a lot of ice hockey and deal with the family."

During a recent interview with Finland's Radio Rock, Dee — who officially joined MOTÖRHEAD at the end of 1991 after a lengthy stint with KING DIAMOND — stated about the first time he was approached about becoming a member of MOTÖRHEAD: "That must have been 1986, I believe…

"It's hard to explain, but they had… They asked me in '86 or the beginning of '87, but we were doing really good with KING DIAMOND. And I'd never really been flying between bands, because it's a bigger band asking me or if there is more money, or whatever it could be. But we were a bunch of friends that really enjoyed what we were doing, with KING, and I'm glad that I stayed and did not join MOTÖRHEAD at that point, because I would have been long gone. [laughs] I wasn't ready for MOTÖRHEAD in 1986. No, I just said, 'Thanks very much, I guess, and I'm gonna stay with KING,' or 'our own band,' as we called it."