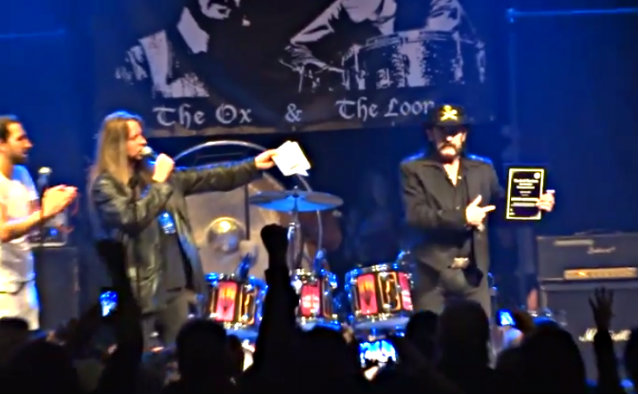 Tichy/Sutton Productions's first star-studded lineup of The Ox & The Loon was a night of rhythmic lunacy in honor of legends John Entwistle and Keith Moon of THE WHO.

After many popular Bonzo Bashes and the first Randy Rhoads Remembered celebration at NAMM 2014, Tichy and Sutton put a night together to honor the most groundbreaking, legendary rhythm section ever.

Tichy stated: "We wanted to do something different and unique by celebrating the 'other half' of rock bands! But not just the other half of any rock band, but the other half of a rock band that is the most legendary of all time! John Entwistle and Keith Moon, The Ox & The Loon, get the unified respect they deserve after taking over the rock world 50 years ago when in 1964, Moon joined up with Entwistle, Pete Townshend and Roger Daltrey, solidifying the most extreme lineup in all of rock, and changing the course of rock history forever!! Hit after hit, anthem after anthem, epic after epic, THE WHO, with Entwistle and Moon as THE iconic rhythmic section, led and paved the way up until Keith Moon's untimely passing on September 7th, 1978.

"These amazing bassists and drummers [got] together to give it back to the legends that wrote and broke the rules of rock 'n' roll!"

Portnoy had this to say: "Keith Moon is hands-down one of my biggest drum heroes... not only the way he played, but the way he PERFORMED! I had the great pleasure of putting together my own THE WHO tribute band back in 2006 with Billy Sheehan, Paul Gilbert and Gary Cherone and it was more fun than any drummer should ever have! So it's my great pleasure to be able to re-visit my hero once again with this very special tribute The Ox & The Loon."

Pilson said: "There's not a bassist alive who ever played in the '70s and '80s (and all times for that matter) that doesn't owe a humongous debt to John Entwistle. His melodic sense, his feel and chops, and his SOUND form the basis of most every rock bass player's foundation. To finally have a show dedicated to the insane rhythm section of Moon/Entwistle is not only long overdue, but is going to be a case study in all-out rock intensity. I'm so honored to be a part of this and I can't wait to play these monstrous rock tunes live and over the top! Sit back and enjoy an evening of music by the masters!"

Lomenzo had this to say: "In my mind, no rhythm section in the history of rock and roll stirred up more excitement than the 'Ox' and the 'Loon.' Pound for pound and note for note, there could not have been a more enigmatic pairing of talents. John Entwistle rewrote the book on what the bass guitar was in the Sixties and what it would and has become throughout the past five decades. His style and tone has left an indelible mark on my playing since I discovered it as a young bassist. If you would ask me who my favorite drummer was throughout my formative years as a young rocker, I would almost indelibly reply, 'Why, Keith Moon, of course...!' For me, his raucous assault that was the engine for my favorite band (THE WHO) can only have been directed and held together by my hero, 'the Quiet One' John Entwistle. This, in my mind was a unity of divergent style unified by attitude. Keith, demonstrative. John, subdued. Both working together at the edge of a ridiculously taught tether that would constantly feel as though it were going to come completely apart! But, ...it never did!"

Tichy said: "The more I listen to Moon and Entwistle, the more I am blown away and inspired! Where do you start? Where does it end? It doesn't! I am so looking forward to this night and putting together a show that brings us all together for the common love of a rhythm section that catapulted THE WHO to the top of all things rock 'n roll!"

Fan-filmed video footage of last night's event can be seen below. 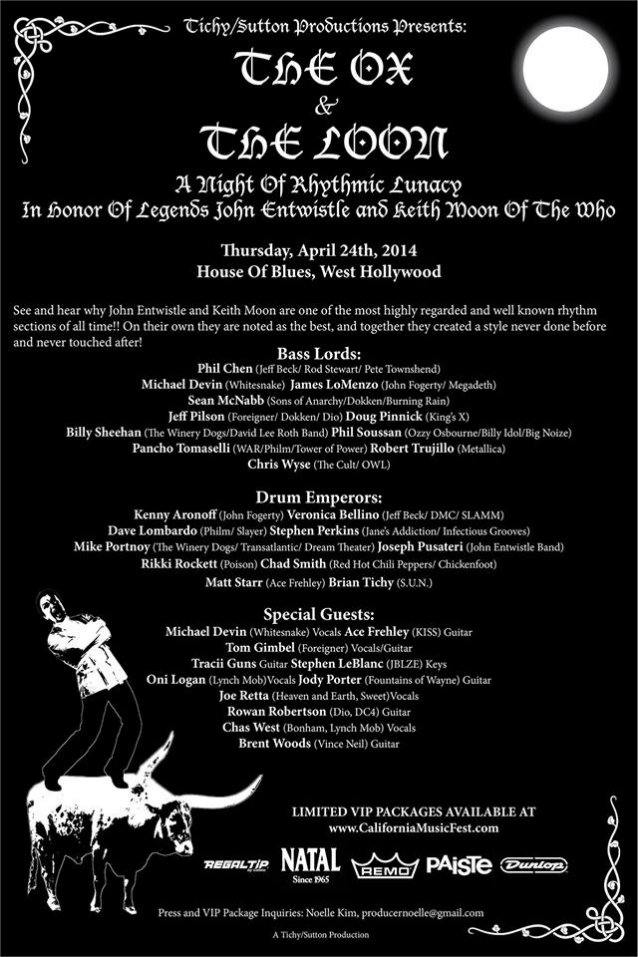