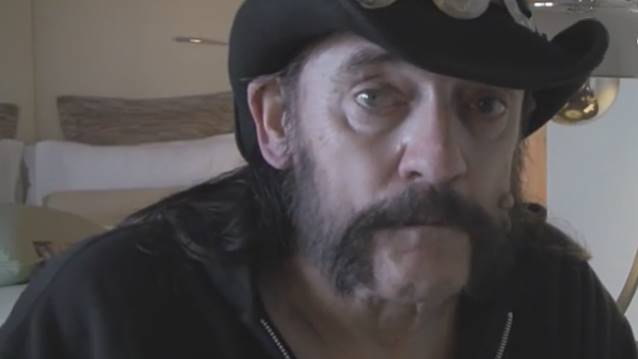 In a brand new interview with VH1.com, MOTÖRHEAD frontman Lemmy Kilmister spoke about his health more than a year after he suffered a haematoma (where blood collects outside of a blood vessel), causing the cancelation of a number of the band's European festival shows. Lemmy was also reportedly fitted with a defibrillator because of heart problems.

"I'm getting back there," Lemmy told VH1.com. "We've just done two tours. It doesn't really matter what you do, it's how you do it and how you feel. I gave up smoking more or less. I have one now and again but that's about it. And I more or less gave up drinking or I switched to vodka instead of Jack Daniels, which is better for you apparently. If you're going to drink, that's the least harmful."

Asked what the worst injury was that he ever suffered on tour, Lemmy said: "Well, let's see. I once fell through a hole in the stage. I used to wear a bullet belt, right? It was chrome, you know, and I crushed two of the fucking bullets flat with my hip bone. That was an interesting half hour. Once we got on stage, by, like, the third song, I couldn't move at all from the waist down. But, you know, you have to go on 'cause there's three to four thousand people who have paid good money. You can't leave them just lying there, if you can help it. Any time we've ever canceled anything, it was because we couldn't actually physically do it."

Lemmy, who turned 68 years old in December, told Classic Rock he didn't expect to still be here at 30,