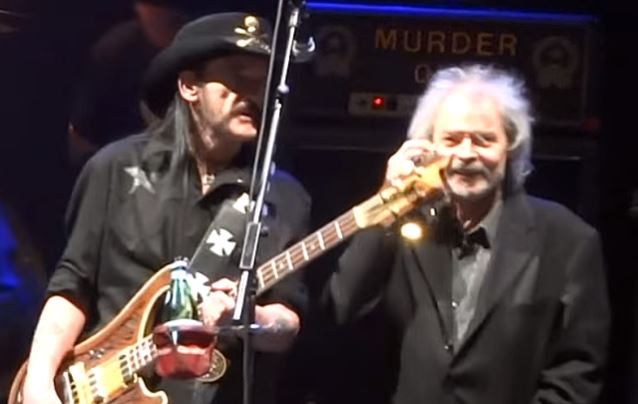 MOTÖRHEAD frontman Ian "Lemmy" Kilmister has paid tribute to the band's former drummer Phil "Philthy Animal" Taylor, who died on Wednesday, November 11 at the age of 61.

Lemmy told U.K.'s Classic Rock magazine that he is "devastated" to have lost one of his best friends as he also remembered former MOTÖRHEAD guitarist Michael "Würzel" Burston, who died in 2011.

Lemmy said: "I'm feeling very sad at the moment, in fact devastated, because one of my best friends died yesterday. I miss him already. His name was Phil Taylor, or Philthy Animal, and he was our drummer twice in our career. Now he's died and it really pisses me off that they take somebody like him and leave George Bush alive. So muse on that."

He continued: "We're still going, we're still going strong, it's just first Würzel and now Philthy, it's a shame man. I think this rock 'n' roll business might be bad for the human life."

Taylor contributed to MOTÖRHEAD's 1992 album "March Or Die" but departed the band during the recording process. The album was completed by drummers Tommy Aldridge and current sticksman Mikkey Dee.

Ozzy Osbourne: "It's a terrible, terrible loss. He was a great friend - great drummer — a great guy and he will be dearly missed. Today is a very sad day for me. Rest in peace — and he still owes me 500 bucks from that time in Vegas."

Slash (ex-GUNS N' ROSES): "Sad, sad news about losing Phil 'Philthy Animal' Taylor. One of the best drummers in rock'n'roll. RIP Phil, you will be missed. A lot."

Dave Mustaine (MEGADETH): "I am very sad to hear about the passing of Phil 'Philthy Animal' Taylor. My condolences to his family. Rest In Peace Phil."