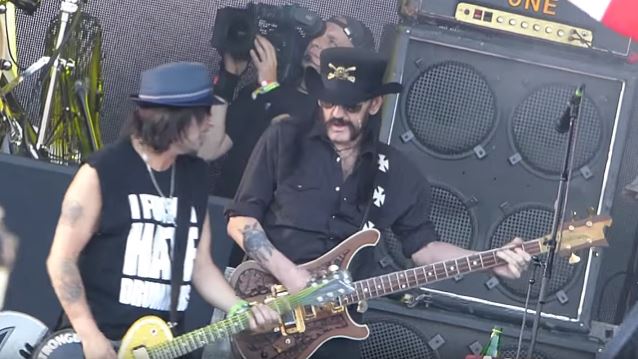 Mick Stingley of Uproxx recently conducted an interview with MOTÖRHEAD mainman Lemmy Kilmister. A couple of excerpts from the chat follow below.

Uproxx: MOTÖRHEAD has some unusual merchandise for sale. Beside your whiskey, there are also now MOTÖRHEAD sex toys, even rolling papers. How involved in the selection of the band's merchandise are you?

Lemmy: [Laughs] Well, see, what they do is, they do a deal with our manager. And then he comes around and tells us and it's too late to change it. So it's always a bit of a surprise, you know? The sex toy thing was a surprise, but it seems to be working out.

Uproxx: Does MOTÖRHEAD still record all of its shows, and will there be any new live albums released soon?

Lemmy: No. We used to, but we stopped doing that. We tape the occasional one just to see that we're keeping up, you know what I mean? But we might possibly release another live album down the line. We've got a European tour in the fall, you know, so we might do something in London for the 40th anniversary. Forty years this year.

Uproxx: You're turning 70 this year! What are your plans for your birthday?

Lemmy: Same as the last five years, I'm going to Vegas! That's what I do on my birthday. I don't really care about Christmas, you know? When you're born on Christmas Eve, it's a big hole in the ground. So I go to Vegas!

Read the entire interview at Uproxx.