Due on July 7 via Wymer, "Motörhead In Full Flight" is a deluxe 128-page hardcase book complete with a set of prints encased in a metal flight case.

This predominantly photographic book — which has not been authorized or approved by MOTÖRHEAD or their management — of largely unpublished, never-before-seen images brings together a mixture of concert photos and off stage shots from the late '70s through to the late '80s, covering the classic lineup with Phil Taylor and Eddie Clarke through to the four-man lineup with Phil Campbell, Würzel and Pete Gill.

The never-before-seen images include shots from recording sessions and video shoots plus back stage at the tenth anniversary gig at Hammersmith, June 1985. There are even some hilarious photos of Lemmy during a beer-tasting session and many more of the band's legendary frontman as you have never seen him before. Included are four prints ideal for framing, one band shot and one each of Lemmy, Phil Taylor and Eddie Clarke.

This strictly limited edition hardback is bound to sell quickly and become a future collector's item, making it an essential addition to any self-respecting fan's MOTÖRHEAD collection. 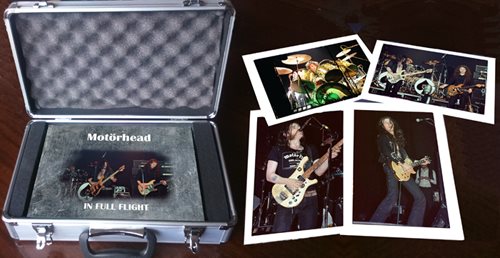