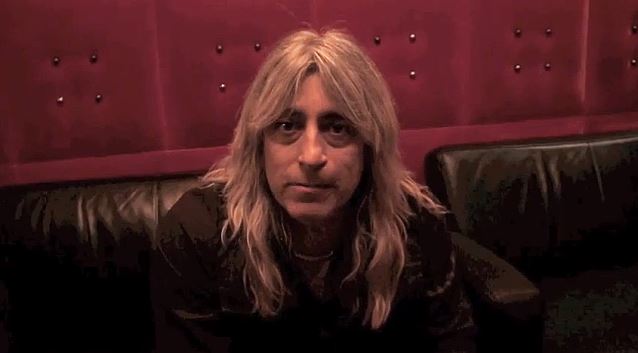 RockNLive.org recently conducted an interview with MOTÖRHEAD drummer Mikkey Dee in Paris, France. You can now watch the chat below.

Asked how MOTÖRHEAD's 21st studio album, "Aftershock", compares to the band's previous releases, Dee said: "You know, I hate when bands say, 'Our new album is the best one we've ever done.' I think it's a cliché, it's boring to hear, and I switch to the next channel. 'Cause I think it's bullshit. And we never say that with MOTÖRHEAD — ever. I say that we've made a new record that it feels like it's a good contender, maybe, but I need way more time to feel if this is one of the better albums we've done. But with 'Aftershock', I think at least it felt very, very good. And now when it's finished, it feels better than I felt in a very long time with the songs. So I really hope that this album is gonna grow even more on me. But it feels like a great album. But I can't say it's the best. People want us to say, 'Oh, it's the best album,' or, 'It's a bad album.' I don't know yet."

"Aftershock" will be released as a an official Classic Rock collectors fanpack that features the new LP in full plus a 132-page magazine that forms the "ultimate sleevenotes" to the new release, with extensive and exclusive interviews with Lemmy, Mikkey Dee and Phil Campbell.

Due in North America on October 22, "Aftershock" was recorded at NRG Studios in North Hollywood, California and is described in a press release as "a true leveler, a crushing confirmation of everything MOTÖRHEAD stands for, marching from the dust storm to deliver 14 belting statements which see MOTÖRHEAD in perhaps their best writing form for years. There's swagger, there's punch, there's speed and there’s dirty filthy grooves, Lemmy Kilmister, Phil Campbell and Mikkey Dee showing clearly that MOTÖRHEAD is not simply a band, it's a genre!"