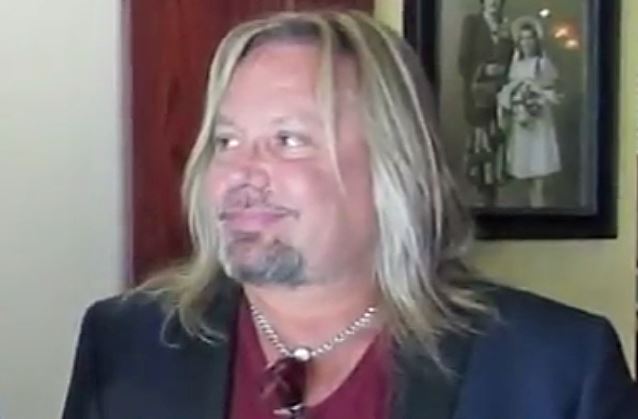 MÖTLEY CRÜE singer Vince Neil plans to stay busy touring with his solo band between now and the end of 2016. Speaking to Helen Yee, host of "Eyes On The Game" sports radio at last week's Nevada Boxing Hall Of Fame press conference in Las Vegas, Neil said about his upcoming activities (see video below): "Well, I've retired from MÖTLEY CRÜE; that's no more. But I've got seventy solo shows starting April 29th 'till the end of the year, so I'll be touring, yeah."

Neil hinted in a recent interview that his solo band is working on new material, with the possibility of road testing some of those songs on his current tour.

"I'll say that we're recording some stuff for a new record this year," Neil told The Michigan City News-Dispatch. "You often hear some surprises at our shows. I don't want to give away some of those surprises, but let's just say you might have struck a nerve that could ring true… I think there's always room for this type of music. Some of the things we are working on will be in that same vein. The music is exciting. It's good, fun, nasty, raw energy and good songs. That's what is so important — good, fun songs. I mean, who wouldn't want to go out and not have a good time? Not me. So I'm thankful to be playing everywhere I am."

Neil's first solo album, "Exposed", came out in 1993, reaching No. 13 on The Billboard 200 chart. His follow-up effort, "Carved In Stone", arrived two years later. Neil's third and latest solo album, "Tattoos & Tequila", was released in 2010 and included two originals along with covers of classics songs from AEROSMITH, SCORPIONS and SWEET.

"Look, I'm going to always be the guy who was in MÖTLEY CRÜE, but my first solo record, with [the song] 'You're Invited (But Your Friend Can't Come)', was over a million seller, so a lot of people enjoyed it and 'Sister Of Pain' and many of those songs," Neil told The Michigan City News-Dispatch. "I'm looking forward to recording more stuff, but I'm really a road singer. I love giving cool, fun performances with a big look."

"Tattoos & Tequila" sold 7,500 copies in the United States in its first week of release to land at position No. 57 on The Billboard 200 chart.

Neil recorded "Tattoos & Tequila" in the winter of 2009 with his solo live backing band, which continues to consist of bassist Dana Strum and Jeff Blando (both of SLAUGHTER) and drummer Zoltan Chaney.