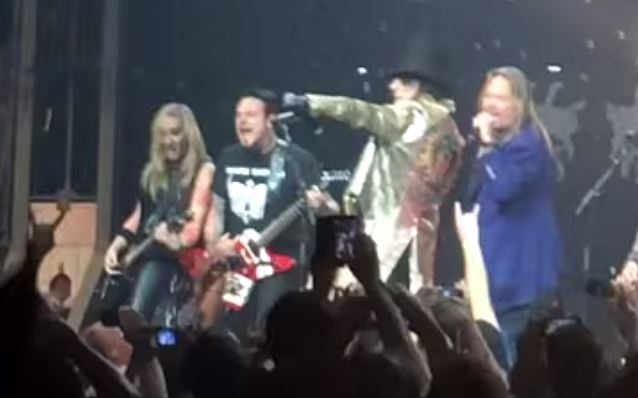 Hook played as a member of pop singers Mandy Moore and Hilary Duff's touring bands before landing sideman gigs with Neil and Cooper and eventually ending up in the lineup of FIVE FINGER DEATH PUNCH.

As previously reported, Hook has teamed up with documentary filmmaker Fran Strine and music manager Jamie Talbot to chronicle the story of world-renowned musicians who are not household names, but are instead the session and backup musicians who have performed at concerts and on countless recordings with huge stars yet remain largely unknown to the public.

The film, called "Hired Gun", goes behind the scenes and explores the personalities and creativity of the best session players and backup musicians in the world, ranging from pianist/harpist Corky Hale, who has played with Tony Bennett and Frank Sinatra, to rock guitarist John 5 who has played with ROB ZOMBIE and MARILYN MANSON.

There is currently an Indiegogo campaign set up to help offset the costs of the film. You can donate and receive a number of incentives from many of the musicians seen in the film. The goal is to raise $35,000 and the campaign runs until December 19.

Strine, who made films about STAIND, Dolly Parton and others, has launched an Indiegogo campaign to fully finance the movie.