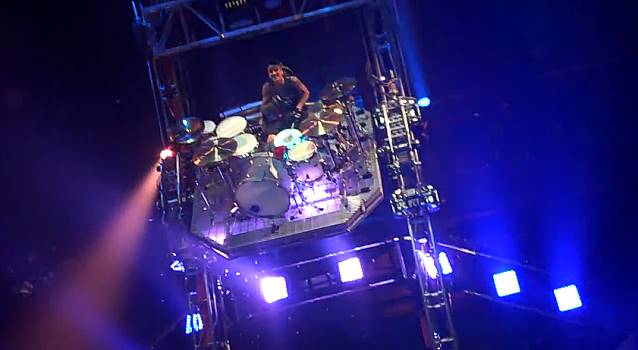 MÖTLEY CRÜE drummer Tommy Lee has revealed that his drum setup for "The Final Tour" will not be featured at every gig on the trek because it poses a safety risk in certain venues.

Dubbed "The Crüecifly", Lee's current drum stunt takes the spectacular roller coaster from his previous tour and extends it way out above the crowd (see video below).

"The Final Tour", which features legendary rocker Alice Cooper in the support slot, kicked off on July 2 in Grand Rapids, and after last night's (Friday, July 4) show in Milwaukee, Lee tweeted why "The Crüecifly" was absent. He wrote: "Hi guys! Want you to know certain venues cannot handle The Crüecifly! It's not our fault their roof cannot hang the rig! It's massive!"

Lee told Music Radar in a 2011 interview how the idea of mounting his drum kit on a giant roller coaster came about. He said: "Every tour we do, everybody's always wondering, 'What's Tommy Lee going to do next? What new, wild and crazy thing is he going to come up with?' And what's funny is, the thrill-seeker and the amusement park fan in me took over this time. Whenever I go on a roller coaster, I always say the same thing: 'Man, I have got to find a way to take the cars off this ride and put my drums on the track!' That's basically where it all started. One day, I drew a design for the whole thing on a cocktail napkin."

Asked how long it took him to get used to riding the roller coaster while performing a drum solo, Lee laughed: "I still don't know if I'm used to it! Everything to do with this is absolutely wrong. Playing upside down is insane. It's two or three times more difficult than what's normal. Your feet want to come off the pedals, your arms want to drop down — all of your body is fighting gravity. The only time it's comfortable is when you're in the down position; the rest of the time, everything's fucking out of control. The drum roller coaster is wild! [laughs]"

Lee's 360-degree roller coaster drum kit was officially "retired" in May 2013 in Atlantic City, New Jersey. The kit, which was introduced during the band's 30-year anniversary tour with POISON and the NEW YORK DOLLS in 2011, was described by The Hollywood Reporter as "a revamped version of the percussive light show Lee used in tours during the late 1980s. The 360, also known as The Loop, had a passenger seat for one lucky fan to ride shotgun with Lee at each show. Lee usually performed one or two complete rotations on the roller coaster himself, along with numerous half-rotations as teasers, before taking on an audience member for an additional two or three turns."

Hi guys! Want you to know certain venues cannot handle the Crüecifly! It's not our fault their roof cannot hang the rig! It's massive!