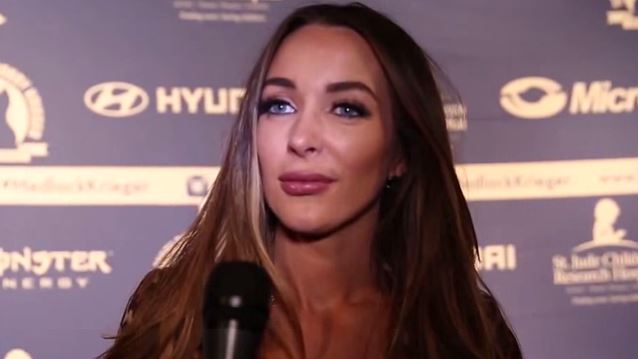 On October 5, Alex Kluft of California Rock News conducted an interview with Courtney Sixx, the 30-year-old wife of MÖTLEY CRÜE and SIXX: A.M. bassist Nikki Sixx, at the all-star concert at the annual Scott Medlock-Robby Krieger Golf Invitational in Moorpark, California. You can now watch the chat below.

Speaking about MÖTLEY CRÜE's "The Final Tour", Courtney said: "MÖTLEY CRÜE is finishing up, and it is the end of the end. People don't believe that, because they think, 'Okay, everyone does their final tour.' Cher's done one [and] a couple of other people; I don't wanna name any names, but there's been, like, nine hundred final tours. But MÖTLEY, actually, is doing a final tour. So their last night is December 31st at the Staples Center. I'm so excited. [I'm] very excited not only for the show, but January 1st, my husband and I are going on a two-week vacation to Mexico, and then after that, he starts touring with SIXX: A.M., which is… I think this will be their fourth album, and it's a double album. And they already have festivals booked; they have probably already forty dates booked for 2016. So Nikki shows no sign of slowing down, which is good for him, but bad for me, because I thought, 'Oh, really? You're gonna retire?' No. No no no no no. He's still going out there and kicking butt. So I'm excited."

This is the third marriage for Sixx, who has three kids with ex-wife Brandi Brandt: Storm Breanne Sixx, Gunner Nicholas Sixx and Decker Nilsson Sixx. He also has a daughter with his ex-wife, "Baywatch" star Donna D'Errico, Frankie-Jean Mary Sixx.

Sixx and Bingham had been dating since 2010, shortly after the breakup of his relationship with tattoo artist Kat Von D.