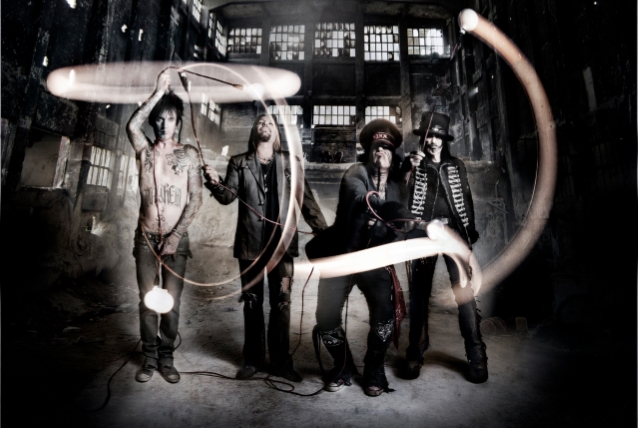 Netflix's long-awaited MÖTLEY CRÜE biopic, "The Dirt", based on The New York Times best-selling 2001 autobiography by CRÜE and Neil Strauss, is finally hitting the flat-screen today (March 22) after 13 years of development limbo.

Bassist Nikki Sixx told Pollstar that he and his bandmates were always confident that the film would eventually see the light of day. "We never gave up hope, but there was definitely frustration," he admitted. "We felt, from the very beginning, that we wanted to tell a story that had multiple layers. It was important for us to get the beginning of the era correctly. Several of the directors we talked to saw this as a 'fun, '80s rock movie.' When we first got together, things were pretty vanilla and boring... There was no rock scene on Sunset back then. We were all into '70s glam, T.REX/Elton/Bowie/DOLLS meets the SEX PISTOLS/RAMONES played with the brutality of heavy metal like BLACK SABBATH or DEEP PURPLE. Just a real big mash-up. We were garage glam, more street, less polished. And it was important to get that backdrop right in the movie."

Sixx added that MÖTLEY CRÜE wanted the film to tell a moral tale about the downsides of all 1980s excess.

"In making this film, it was always the band's intention to show the truth of what happens when you're young and successful, not just in rock 'n' roll, but as an athlete, politician, writer, you name it," he said. "All of a sudden, you're in the zone, everybody loves you, the money, drugs and girls start pouring in, the touring, the crowds. We wanted to show the initial thrill of that. We didn't want to make 'Trainspotting'. But as you get sucked into the story, the mood changes. It was important to all of us to have that shift in tone, where everybody's actions came back to bite them in the ass. And how we handled it as a band. It's easy to be on top; it's a walk in the park, but guess what… Winter comes, and it came in the movie. What I love is that you see how we made those decisions — the wrongs ones and the right one, to pull the family back together."

Nikki also talked about CRÜE's decision to go with Netflix instead of a theatrical release.

"There are some fans on the MÖTLEY CRÜE Facebook page bummed out about not being able to get a Blu-ray or DVD," he said. "Why do you need to carry around a disc when you can just watch the movie a million times whenever and wherever you want? Part of our initiative is to move our audience to streaming and Netflix is the biggest streaming company. There are a great many young fans discovering rock 'n' roll for the first time. We want to bring everybody to the future and not just have them live in the past. That's our goal."

"The Dirt Soundtrack" accompanies the movie and features a collection of MÖTLEY CRÜE classics that meaningfully underscore significant moments that shape the film. Exclusive to the film's soundtrack, MÖTLEY CRÜE recorded four new songs, including the single "The Dirt (Est. 1981) (feat. Machine Gun Kelly)", "Ride With The Devil" and "Crash And Burn", plus a cover of Madonna's "Like A Virgin".