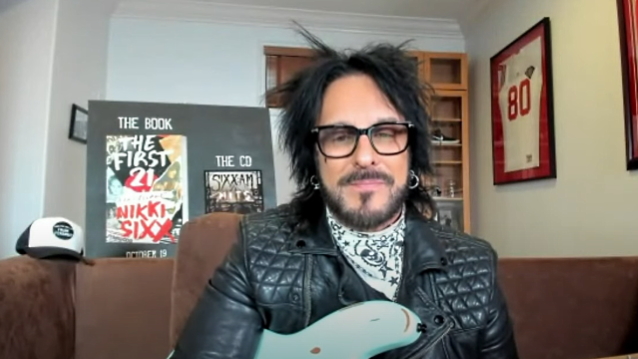 MÖTLEY CRÜE bassist Nikki Sixx spoke to Australia's "The Project" about his just-released memoir, "The First 21: How I Became Nikki Sixx". Available via Hachette Books, the book explores the Idaho-born Franklin Carlton Feranna's early childhood and troubled teenaged years before he ended up in Hollywood where he — under the names Nikki London, Nikki Nine, and, finally, Nikki Sixx — broke through in the music industry.

"I was born Frank Feranna in 1958," Nikki explained (as transcribed by BLABBERMOUTH.NET). "A lot of messaging that I heard when I was a young boy about my dad and about my mom — and I ended up being raised by my grandparents — I kind of carried that with me. When I got into that time in my life when I started to become of age and the hormones and discovering rock and roll, by the time I got to a place where I was playing in bands, I didn't wanna carry my dad's name on with me. So I changed my name to Nikki Sixx legally and said, 'I'm moving forward.' And I did. I got my own family — everything Sixx everywhere. I actually did manifest a new life. But in writing the book, I realized it wasn't all true. My dad didn't just walk out on us. There were a lot of discrepancies. And so in the book, what I enjoyed was I got to learn a lot about my history. It kind of really helped me heal, I guess, in a lot of ways, some of the stuff, and I hope I can pass that on to other people."

In "The First 21", the 62-year-old rocker reveals that he stole the name Nikki Sixx from Jeff Nicholson, who, as frontman of a California cover band called SQUEEZE, went by Niki Syxx.

"I loved that name right away — even though it was missing that sweet extra K," Sixx writes, as per the New York Post. "Then and there, I decided to steal it. For a while I went around calling myself Nikki London... 'Nikki Nine' was on the table briefly."

Eventually, he went back to his original inspiration, slightly changing the spelling: "Then I thought, 'Fuck it... I'm just going to be Nikki Sixx."

Sixx is an international rock icon, founding member of MÖTLEY CRÜE and SIXX:A.M., three-time New York Times best-selling author (with "The Heroin Diaries", "This Is Gonna Hurt" and MÖTLEY CRÜE's "The Dirt"), philanthropist, photographer, and addiction recovery advocate. Sixx had the No. 1 nationally syndicated rock radio show "Sixx Sense With Nikki Sixx" on iHeart Media for seven years. In March 2019, Sixx premiered CRÜE's hit Netflix biopic "The Dirt", based on the band's 2001 autobiography. Sixx has been a longtime advocate for expanding the support services for people in recovery from substance use disorder (SUD). He has given testimony on Capitol Hill, made frequent media appearances to discuss his experiences, and authored op-eds on the subject in major publications.