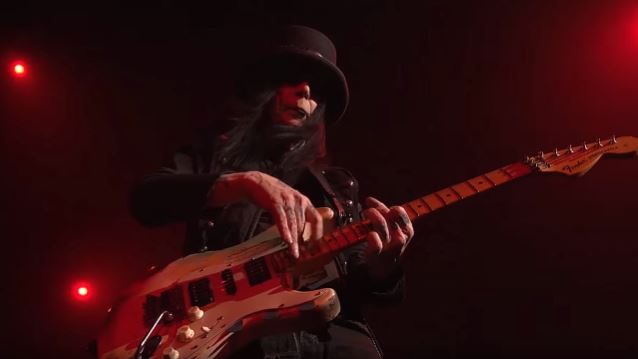 Mick Mars is continuing work on his debut solo release.

The MÖTLEY CRÜE guitarist has spent the last couple of years writing and recording material for his first solo album at a studio in his hometown of Nashville, Tennessee.

Mars told SiriusXM radio DJ Eddie Trunk last week that he was "weeding out crap songs and writing new ones pretty consistently." He added that was waiting for his producer to become available again so they could resume work on the project, which "most likely won't be finished until late spring."

Mars made his first post-MÖTLEY CRÜE appearance in June 2016 when he joined Kenny Olsen on stage at Ernie Ball Music Man Pickers' Paradise party at Mercy Lounge in Nashville, Tennessee to perform a couple of rock classics, including LED ZEPPELIN's "Rock And Roll" and "Hey Joe", written by Billy Roberts but popularized by Jimi Hendrix.

A tour film about MÖTLEY CRÜE's final shows, "The End", came out last year, and a film adaptation of the band's 2001 autobiography "The Dirt" is said to be in negotiations to land at Netflix.