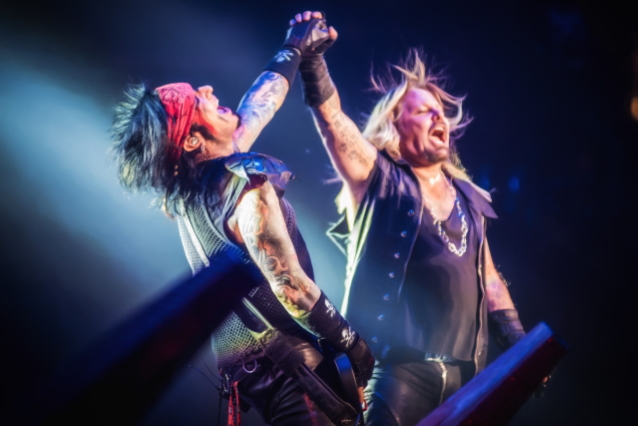 Why did MÖTLEY CRÜE scrap its contractual agreement to never tour again just four years after the band's farewell trek? The answer is simple, according to Allen Kovac, who has been managing the band for 26 years: a renewed interest in the band thanks to the success of the Netflix biopic "The Dirt", which was seen by "tens of millions of people," with streaming of the band's music increasing more than 350 percent, and the majority of its fanbase shifting from the 45- to 58-year-old demographic to 18 to 45.

Earlier in the month, CRÜE confirmed it will team up with DEF LEPPARD, POISON, and special guests JOAN JETT & THE BLACKHEARTS for a 22-date North American stadium tour next summer. Produced by Live Nation, "The Stadium Tour" kicks off July 7 at Miami's Hard Rock Stadium and winds down on September 5 at Los Angeles' SoFi Stadium. According to Kovac, a third of the dates are already sold out, and six more shows will be announced soon, possibly next week.

Kovac also addressed criticism of CRÜE singer Vince Neil for his supposed diminished singing ability and weight gain and the health status of guitarist Mick Mars, who has been dealing with a chronic form of arthritis that led him to undergo a hip replacement.

"Some of them are working with a trainer, some of them are working with a nutritionist to make themselves the best they can be," Kovac told Fox Business. "The greatest insecurity for an artist is: Is anyone going to care about my music? Is anyone going to buy a ticket? We were in November when the discussions were happening, and these guys were already into regimens of how they get ready for a tour."

Speaking specifically about Neil, Kovac said: "Let's see what Vince sings like and looks like when the tour goes out."

At a press conference in Hollywood announcing the CRÜE's stadium tour, bassist Nikki Sixx explained the band's decision to return, saying: "Honestly, I don't think any of us thought, when we were on 'The Final Tour', we would ever get back together. We weren't really getting along at that point. We had been together 35 years, and it had been a lot of years on the road. I don't think we took a lot of time for ourselves off; we were just constantly touring for all that time. And when it came to the end, we broke the band up and everybody went their own ways."

Sixx continued: "It was during the making of 'The Dirt' movie, we started working on the script, started being on the set, we started hanging out again together. And I think we really started to realize — without even talking about the music — how much we missed each other. And then that got us to go in the recording studio, which is where the whole thing always starts for all of us."

"The Dirt", a film adaptation of the CRÜE's 2001 memoir, featured four new songs recorded by the band expressly for the soundtrack.