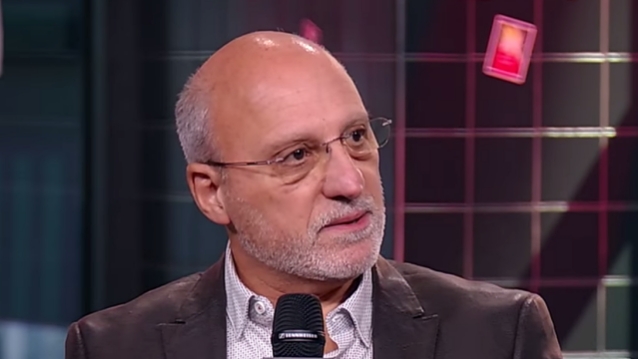 Presented by Helen Smith, executive chair of IMPALA, a special video was sent by Sir Richard Branson, congratulating Allen and recognizing his role as an influential figure in the global music industry.

Said Branson in the video: "Well, good evening, everybody, I'm just sorry that I'm not with you tonight to celebrate that rare beast that is more important than ever in music these days — an innovator.

"I've known Allen since the early '90s when Allen was managing Meat Loaf whom Virgin Records had signed and Allen was pushing myself and the Virgin team to allow Meat Loaf to upload one of the first songs to the fledgling Internet. As innovators, we would do anything for music and, of course, we did just that.

"From humble beginnings as a promoter, Allen went on to be a manager of the BEE GEES, BLONDIE, MÖTLEY CRÜE, DURAN DURAN, THE CRANBERRIES and then started Eleven Seven Music which is now, 12 years later, one of the top rock labels in the world.

"Allen has innovated and tested the limits of marketing and social media and ticketing and streaming and sales reporting, which must make him feel as old as I am. Anyway, benefiting independent community and levelling the playing field between independents and the majors, plus encouraging the fair valuation of music by tech giants. Whether it was Steve Jobs with the iPod and iTunes, Daniel Ek with Spotify or Amazon with smart speakers and in-car technology with Alexa, Allen has been ahead of the curve — collaborating, consulting and promoting new tech to the industry. From SoundScan to DDB Needham, Allen has brought data and branding closer to music. He never tires, and this year Allen produced the number one Netflix movie, 'The Dirt', the story of MÖTLEY CRÜE. And his next major project with Nikki Sixx is 'The Heroin Diaries' musical. I hope that 'The Heroin Diaries' will destigmatize addiction and do for the opioid crisis what 'Rent' did for HIV and AIDS.

"I would like you all to join with me in congratulating Allen Kovac for his AIM 'Innovator' in music award. Allen, this could not be more well deserved."

Allen is a fierce defender of artist rights and levelling the playing field for independent labels. He created Eleven Seven Records in 2006, a full-service independent label which handles everything from radio and licensing to publicity and marketing. They have dominated American rock charts and are the No. 1 rock label in the world. The company has taken American metal band FIVE FINGER DEATH PUNCH to arenas, restored PAPA ROACH to the top of the charts and much more. Expanding last year, Dan Waite was appointed as the new managing director of E7LG Europe in London and Bjorn Meyer COO of E7LG Europe, working out of Berlin.

Allen has been an entrepreneur, pioneer and innovator in music all his life, working as a promoter, a manager and forming a record label, publishing company, a management company and a strategic marketing music research company.

In early 2000, he met with Steve Jobs in Cupertino, California to discuss a digital jukebox which went on to be iTunes launched in 2003.

In 1993, Allen pushed Virgin Records to allow Meat Loaf's "I'd Do Anything For Love" to be one of the first songs ever to go on the Internet with Progressive Networks and hosted what was believed to be the first music press conference online with DURAN DURAN.

Allen was an early supporter of Spotify and in 2009 spoke to the music industry on their behalf in New York, London and Los Angeles, encouraging labels to move away from a one-time £10 purchase to a lifetime of streaming their favorite albums.

In 2018, Allen produced the Netflix movie "The Dirt", the story of MÖTLEY CRÜE, the world's most notorious band, and is currently producing "The Heroin Diaries" musical with Nikki Sixx, due to launch in 2019.

Most people are familiar with Nielsen SoundScan, which tracks music sales to create their Hot 100 Chart. Allen consulted with SoundScan, BDS, EMI, MCA and RCA to show fan and consumer data in demographics and psychographics which ultimately led to SoundScan charts as we now know it.

Currently Allen is still involved in management, record labels, music documentaries and films, and innovating with BuzzAngle, streaming, ticketing, and working closely with Live Nation, Spotify and ticket master to help plan tours with streaming data, a strategy noticed by Liberty Media which resulted in them buying Pandora.