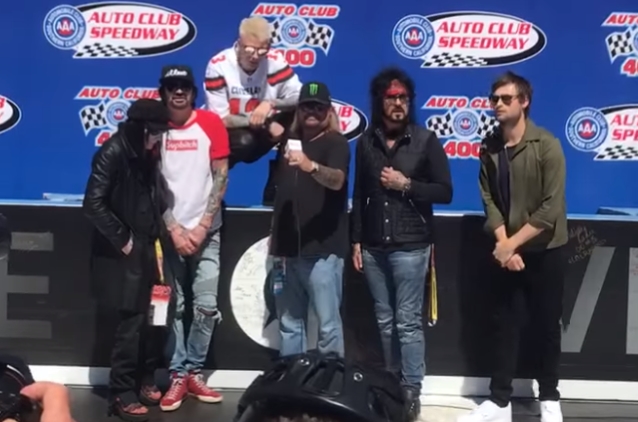 Named grand marshals of the race, they gave the famous command "Drivers, Start Your Engines" prior to the start of the Auto Club 400.

Joining the band were actors Douglas Booth (who plays bassist Nikki Sixx) and Colson Baker, a.k.a. Machine Gun Kelly (who plays drummer Tommy Lee) from the upcoming Netflix film "The Dirt", which launches with its soundtrack on March 22.

Lee said in a news release prior to the event: "Growing up, we were race car fans and dreamed of fast cars, so to be included in the Monster Energy NASCAR Cup Series event is wild!"

Sixx added: "We are super stoked to give the command at the Auto Club 400. It's going to be an epic day at the race track."

"The Dirt" movie, which was helmed by "Jackass Presents: Bad Grandpa" director Jeff Tremaine, was picked up by Netflix after being previously developed at Focus Features and before that at Paramount. The film's 18-song soundtrack, mastered by Grammy winner Dave Donnelly, features a collection of MÖTLEY CRÜE classics that meaningfully underscore significant moments that shape the movie. Exclusive to the film's soundtrack, MÖTLEY CRÜE recorded four new songs, including the first single "The Dirt (Est. 1981) (feat. Machine Gun Kelly)" and a cover of Madonna's "Like A Virgin".