Barry Drinkwater and Dell Furano jointly stated: "MÖTLEY CRÜE was undeniably one of the most notoriously popular rock bands of the '80s. We're excited to partner with such a legendary, iconic, gritty and influential part of L.A.'s music history to develop a global licensing program that truly captures the essence of MÖTLEY CRÜE."

In addition to this exciting partnership, MÖTLEY CRÜE is thrilled about the upcoming release of the Netflix film "The Dirt", based on its best-selling autobiography. The film is an unflinching tale of success and excess as four misfits rise from the streets of Hollywood to the heights of international fame launching globally on Netflix on March 22.

Chris Nilsson, president of 10th Street Entertainment, which manages MÖTLEY CRÜE, said: "'The Dirt' is a movie about the world's most notorious rock band. I knew the only way we were going to fulfill the demand for iconic MÖTLEY CRÜE merchandise created by the movie was to assemble a team of individuals more notorious than the band themselves. So, I called Barry Drinkwater and Dell Furano. We are so excited to work with Global Merchandise and Epic Rights and are confident that they, together, can get the MÖTLEY brand into the hands of global consumers everywhere."

"The Dirt" soundtrack will also arrive on March 22 and features a string of CRÜE classics, as well as three new songs and a cover of Madonna's "Like A Virgin". The first of the new tunes, "The Dirt (Est. 1981)", a collaboration with rapper Machine Gun Kelly, was released last month.

"The Dirt" was picked up by Netflix after being previously developed at Focus Features and before that at Paramount. 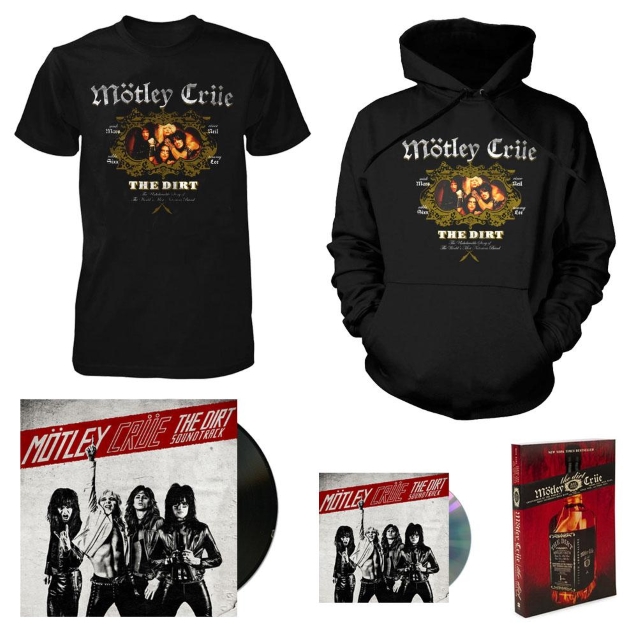