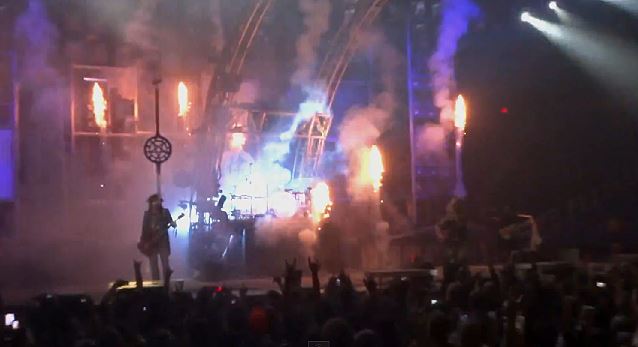 Fan-filmed video footage of MÖTLEY CRÜE's October 22 performance at the Greensboro Coliseum Complex in Greensboro, North Carolina can be seen below.

According to Las Vegas Weekly, there are tentative plans for MÖTLEY CRÜE to end its "The Final Tour" by playing "couple of nights" in Las Vegas in late 2015 and finishing off with a few shows in the band's hometown of Los Angeles.

"Rumor has it, the last few shows are going to be Vegas and L.A., because we wanted to end in 2016 in Los Angeles where we started," MÖTLEY CRÜE singer Vince Neil told the site.

"After New Year's, we'll do three nights at one of the arenas in L.A.," Neil added. "And then do a special show at the Whisky a Go Go on our 35th anniversary."

MÖTLEY CRÜE drummer Tommy Lee recently told Rolling Stone: ""We want to finish where we started. There's talk about the Staples Centre and the Forum, though it might end with a 1 a.m. show at the Whisky. Fuck, we all used to live around the corner from that club."

Sixx added. "After we take the final bow, I'm gonna drive home alone with the radio off.

"I'll go past the Roxy, the Rainbow and the Troubadour. I'll open the door to my house and be like, 'Where did all the fucking years go?' Then I'll close the door and wait for the next chapter."

MÖTLEY CRÜE in August completed the first leg of its "The Final Tour" with support from Alice Cooper. The current leg of the trek kicked off on October 10 in Oklahoma City and will conclude on November 22 in Spokane, Washington.

"The only loophole is if all four members agreed to break the contract," Sixx said before adding. "There is no amount of money that would ever make me do it again. We'd have so much egg on our face."

After the completion of the farewell tour, MÖTLEY CRÜE guitarist Mick Mars is expected to put the finishing touches on his long-in-the-works debut album as well as a memoir. Sixx will focus much of his efforts on his other band, SIXX: A.M., while Neil will continue his solo career. Lee's plans have not yet been revealed, but he did tell Newsday: "I am writing and putting things aside. It's a different direction from my last solo work because I'm changing around all the components. It won't be something you've heard or seen before. Believe me, I'm not done after this."