The world's most notorious rock band MÖTLEY CRÜE has announced the release of "The Dirt Soundtrack" that accompanies the upcoming Netflix film "The Dirt", based on The New York Times best-selling 2001 autobiography by MÖTLEY CRÜE and Neil Strauss. The soundtrack and film are set to release March 22 worldwide.

"During the filming of our movie we got excited and inspired to write new music," said bassist Nikki Sixx. "Getting back in the studio with Bob Rock just fueled the creative fires for us. To me, the music sounds like classic MÖTLEY. The lyrics were written for the movie and are a reflection of our life."

The 18-song soundtrack mastered by Grammy winner Dave Donnelly features a collection of MÖTLEY CRÜE classics that meaningfully underscore significant moments that shape the film. The album includes 14 fan favorites and chart topping tracks such as "Dr. Feelgood" that charted at No. 6 on Billboard's Hot 100 and the anthemic "Girls, Girls, Girls" which reached No. 2 on the Billboard Top 200, among others. Additional hits featured are "Kickstart My Heart", "Same 'Ol Situation (S.O.S.)", "Shout At The Devil" and the iconic ballad "Home Sweet Home" that landed the band mainstream recognition.

Exclusive to the film's soundtrack, MÖTLEY CRÜE recorded four new songs featuring the single, "The Dirt (Est. 1981) (feat. Machine Gun Kelly)" with effortless rap verses surrounding signature guitar riffs. The three remaining songs conclude the album with the catchy "Ride With The Devil", "Crash And Burn" and the band's own spin on Madonna's "Like A Virgin".

The feature is quite dark, with an emphasis on Sixx's heroin addiction and the death of Neil's daughter Skylar from cancer. Addressing the film's long gestation period, Sixx noted: "Anybody can make a shitty rock movie. We don't want to do that. A lot of people don't understand rock music and the rock 'n' roll lifestyle. It's not just sex, drugs and car crashes. Those things happen ... and, in our case, more than usual. But what's at the core of it all is the creativity and the personal relationships between each bandmember. We don't just want to slap together the thrill moments. Any of the great movies, whether it's 'Walk The Line' or 'Ray', they got the music right and the personalities right."

During an appearance on the February 21 edition of SEX PISTOLS guitarist Steve Jones's radio show, "Jonesy's Jukebox", on the 95.5 KLOS radio station, Sixx said about how "The Dirt (Est. 1981)" came about: "We were in New Orleans. That's where we filmed most of the movie. And we were flying back, and I was flying with Tommy [Lee drums]. We're not a band anymore officially — we don't tour. And I said, 'Let's write some music.' And I didn't think we would ever do anything again together besides this movie — we kind of called it a day. And I had about seven, eight songs I had been working on — not for MÖTLEY CRÜE. I was working with John 5 [ROB ZOMBIE guitarist]. We were just writing music. So I had these ideas. And Tommy said he had a bunch of ideas. And Mick Mars [guitar] had some ideas. And we just started kind of putting them together. And we ended up with nine songs all called 'The Dirt'. And by the time we figured out which ones we loved, we were down to three songs, and this song ended up being the one we chose for the first single. There's also three other songs that are gonna be coming out as well." 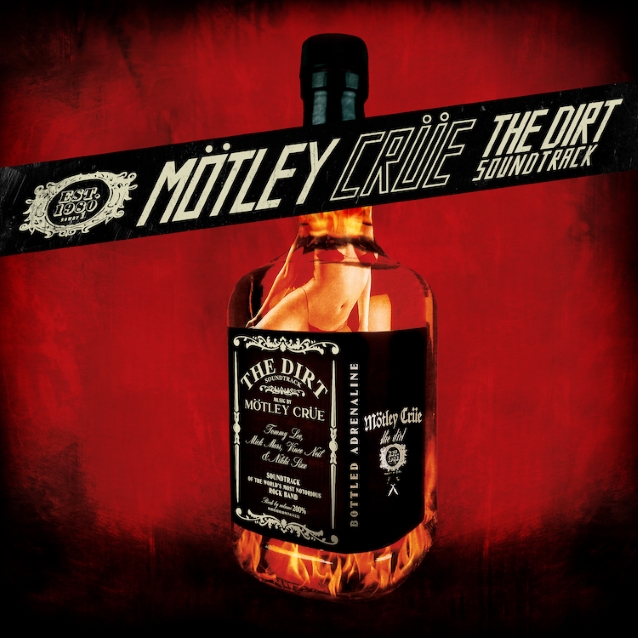