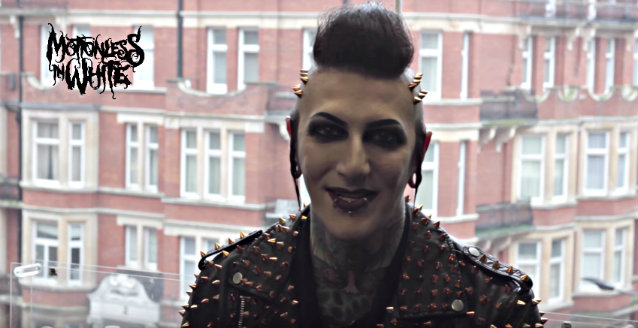 MOTIONLESS IN WHITE singer Chris Motionless spoke about KORN frontman Jonathan Davis's guest appearance in the MOTIONLESS IN WHITE song "Necessary Evil", which is featured on the latter band's new album, "Graveyard Shift". "That came about because a couple of months prior we had done a tour with [KORN] and BREAKING BENJAMIN throughout the U.S.," Chris said in a promotional video released by Roadrunner, the record label that issued the "Graveyard Shift" disc (see video below). "And KORN [is] a band that I've loved and looked up to for a really long time in my life — I think [in] seventh grade was the first time I heard 'Follow The Leader' and 'Life Is Peachy'.

"We were working on this song and I was working on the vocals for it, and it just felt like… There was something about it that I felt like… As I was writing some of the vocals, I was writing it hearing Jonathan's voice as the person I was writing it for," he continued. "I had written different parts of the song that, of course, felt like, 'Okay, I'm gonna sing this. I'm gonna sing this.' And then it came time to other parts, and I was just hearing Jonathan on this song. And knowing how much of a great, nice… all of [the KORN guys] were really nice people on the tour and were super great to be around and nothing but pros in every sense of the word. I was, like, 'Okay, I'm just gonna risk it and throw it out there and see if he's interested,' and he came back and said he was definitely into doing it.

"Hearing it back now, it was super easy — very… Like I said, those dudes are pros," Chris said. "It's no secret as to why KORN has had the success that they've had. And when I listen back to it, I think back to being a kid in seventh grade and hearing 'Freak On A Leash' and seeing that video with the bullet flying through the screen the whole time and how crazy that was to me when I first saw it. And I think back to the moments of where, for Christmas, I wasn't working and I didn't have any money, I was in seventh grade or eight grade at that point — maybe in ninth grade — and still being a massive KORN fan, I remember begging my dad to buy me a seven-string guitar like Head and Munky played, and he ended up buying it for Christmas for me. And I got the 'Follow The Leader' tab book and just learned every song in the book. And now, all these years later, so much later in life, I can hear one of my own songs that was written by taking all that time and learning how to play guitar and wanting to play music, and I can hear one of my own songs with Jonathan Davis singing on it, it's kind of a really emotional moment for me. And when I told my dad about it, he immediately recognized that moment in our history, and it's a really special thing. So I'm really happy that Jonathan wanted to do it and I'm very grateful that he said yes."

Last fall, MOTIONLESS IN WHITE opened for KORN on their co-headlining "The Nocturnal Underground" tour with BREAKING BENJAMIN.

MOTIONLESS IN WHITE has been announced as lead support on the second leg of IN THIS MOMENT's "Half God Half Devil Tour". The second leg of the summer trek is set to begin June 28 at St. Louis, Missouri's The Pageant and continue through early August.

As if that were not enough, MOTIONLESS IN WHITE is also set to light up an array of festivals around the world, including Columbus, Ohio's Rock On The Range (Friday, May 19). From there, the band will cross the Atlantic for a European tour highlighted by headline dates and festival performances. 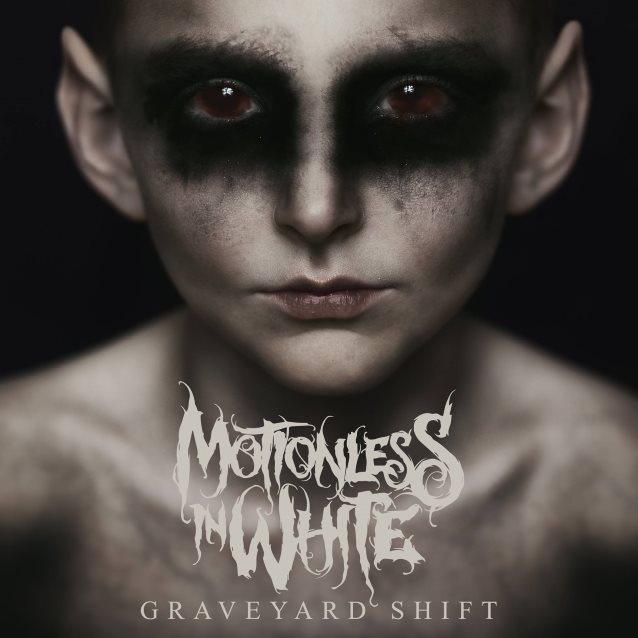