Inked: When did you get your first tattoo?

Lemmy: In 1973 when I was in HAWKWIND. We were in Dayton, Ohio, on a Sunday, and the tattoo shop was the only place open. We were totally fuckin' bored, so we all went down there and got a derisive hippie tattoo. Mine was a marijuana leaf, which I've since had covered up because it looked like a pizza with wings.

Lemmy: The Ace of Spades one, but you can't read that anymore. It says "Born to Lose, Live to Win" around it, but the words have bled into each other. That was done in 1979 in Holland.

Lemmy: No shit, man. A friend of ours in Germany has his entire back covered with the logo and he's got us tattooed on the sides of his head and chest. He's got our faces on the calves of his legs.

Inked: Is it strange to see your face tattooed on someone?

Lemmy: If it's a good picture, I don't mind, but if I look like a pig with a goiter, then it's not so good. I've seen both.

Lemmy: Yeah, one of 'em's about Iraq, "When the Eagle Screams". I wrote that because I know the history of war. I've studied it, and this is a prime example of money sending boys to their deaths. The interest's winning over the logic. Everybody knew there were no weapons of mass destruction in Iraq because we sold them everything they had. I'll tell you a funny story. You know when the British invaded Iraq with you guys? We didn't have any desert uniforms. We only had the green and the khaki because we sold all the desert uniforms to Iraq three years before. Isn't that great? I just hate all politicians. They're all bastards.

Inked: Your signature song is "Ace of Spades". Are you a big gambler?

Lemmy: No, not really, I just like to play. Like it says in the song, "The pleasure is to play, makes no difference what you say." No gambler ever wins, not in the long run. The most I've lost at any one time is three grand. I won nine grand on one pull of a lever seven years ago at the Venetian in Vegas. I put two grand back and took seven grand home. That's very good for me.

Inked: You often go to strip clubs. Are you a fan of the lap dance?

Lemmy: Sure. It's a tease, but you can sometimes talk them into it, you know? And you can only talk them into it if you have a lap dance. You can't convince them to go home with you from the bar.

Lemmy: Five of them over the years, actually.

Lemmy: I don't kill and tell.

Lemmy: No, they're just the same, but then again I'm not as good in bed as the people I usually fuck, so I suppose it evens out.

Lemmy: Mostly chasing women, I suppose. Actually, no, that's a career. The music's the hobby.

Inked: You wrote one of Ozzy Osbourne's biggest ballads, "Mama I'm Coming Home". How did that happen?

Lemmy: Just after I moved to the States, Sharon [Osbourne] rang up and said, "Can you write four songs for me," and made me an offer I couldn't refuse. One of them was "Mama I'm Coming Home". I made more money out of those four songs than I did in 15 years with MOTÖRHEAD. And then I wrote two more for "Ozzmosis".

Inked: You seem to have a love/hate relationship with Sharon.

Lemmy: No, it was just she took over our management for a month in 1991. And when we went to Japan, she sent a tour manager over with us and he fucked up all the money and then said it was our fault. She trusted his word over ours, which is fairly natural because she was his guy. But I never forgave her until last week when she finally said, "Okay, I believe you."

Inked: Are you at all religious?

Lemmy: I'm an agnostic, really. I'll wait and see … and I can wait. But I'm not afraid of dying. What's the point of being afraid of the inevitable. I just hope it won't be in a hospital surrounded by assholes and tubes up your nose, you know? My ethic is, "Eat, drink, and be merry, for tomorrow we die." You can be as careful as you want, but you're gonna die anyway, so why not have fun.

Inked: The world is at war and the economy and the environment are a mess. Is mankind doomed?

Lemmy: Don't kid yourself. It is too late. We're done. Pretty soon we'll all be extinct or living in hermetically sealed caves because we're poisoning the air we breathe, the water we drink, and the food we eat. Any questions? And it's not like we haven't known this, but businesses wanted the money more than they wanted their children to live. Isn't that wonderful? You can count on mankind every time.

For the full interview, go to www.inkedmag.com. 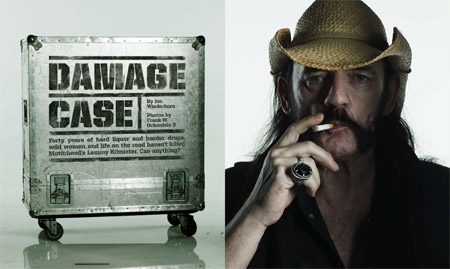