Mindark, developer and operator of Virtual World Entropia Universe, and rock icon Lemmy from MOTÖRHEAD, today announced a partnership in which Lemmy and his band will team up with Mindark to create Motörhead Stadium and Lemmy's Castle within Entropia Universe. The Stadium and Castle are being built utilizing the award-winning CryENGINE2 graphics engine. This will be the virtual universe's first major virtual rock arena and castle that will enable fans to hear exclusive music as well as battle Lemmy's Guardians in hopes of joining his private Virtual Army. Lemmy's Castle will be defended by Guardians, some of whom when defeated, will drop rare and valuable Motörhead Armor Parts. Fans must collect a full set of Motörhead Armor in order to gain entrance to the inner sanctum of Lemmy's Castle and be eligible to join Lemmy's private Army.

Army Privileges will include: the ability to chat with Lemmy online in the army's private chat channel, and the opportunity to compete in special quests and events to win both real and virtual MOTÖRHEAD merchandise. Among the cool prizes will be an exclusive trip to Los Angeles for drinks with Lemmy at the famous Rainbow Bar and Grill on Sunset Blvd.

Fans can already download the free software online at Entropia Universe and create a unique avatar which will then be used to visit Motörhead Stadium, where they can view exclusive metal and rock concerts, pre-recorded or broadcast live from around the world. In addition to the live music, fans will be able to create their own social networks and fan clubs, battle monsters to earn real cash, and even manufacture and sell collectable virtual rock merchandise.

Entropia Universe is the first virtual world with a real cash currency that has a fixed exchange rate with the U.S. dollar. Avatars develop professional skills to assist them in gathering natural resources to sell, trade and manufacture. In 2007 alone, the real cash turnover between players in Entropia Universe exceeded $400,000,000 USD! In an era of declining record sales, Entropia's Real Cash virtual platform offers bands, artists, labels and studios an entirely new and extremely valuable method to monetize their content.

MOTÖRHEAD is no stranger to video games, having recently provided a number of tracks for the hit console game Guitar Hero. 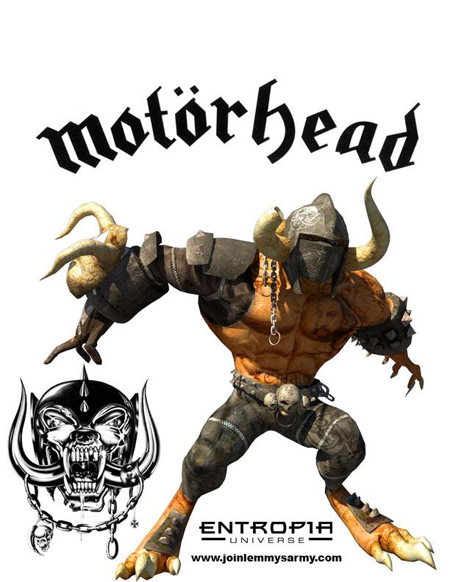